Avascular necrosis (AVN) of capitate bone is very rare and was first reported by Jonsson in 1942.¹ In most of cases, it has correlation with serious trauma to wrist.² However, in some cases, severe trauma does not have significant role in its ethology. In some reports, AVN occurred without any history of serious trauma.2,3 In such cases, the main etiology is unknown. Some theories have proposed reasons such as increased bone venous pressure, a consequence of venous thrombosis, reduced arterial flow, and hypoxia as the factors in advancement of ischemic necrosis of capitate bone.4 Repetitive motion micro-trauma is one of the other factors which could lead to blood supply disorder in this bone and hence extend AVN.2,3

In this report, a young worker referring to our orthopedic clinic with chronic wrist pain who was diagnosed with AVN of capitate bone is presented.

A male 30-year-old worker complaining from pain in left hand wrist for one year referred to orthopedic clinic. He mentioned no history of direct trauma or inflammatory disease. Examinations showed slight tenderness and inflammation by touching wrist dorsal. No deformity was observable. Wrist range of motion was normal in passive motions of wrist. However, the wrist was painful in palmar dorsiflexion and flexion. No sign of dorsal or volar instability was observed. In comparing the active motion of right and left wrist, dorsiflexion was 900 in right hand and 700 in left; palmar flexion was 90⁰ in right and 80⁰ in left hand. He expressed that he had changed his job two years ago and was working as a worker in urban service unit and worked with air compressor jack hammer. He was also left-handed. Conventional radiography of wrist showed a subtle decrease in density of entire capitate bone without any evidence of collapse or sclerosis (Figure 1). 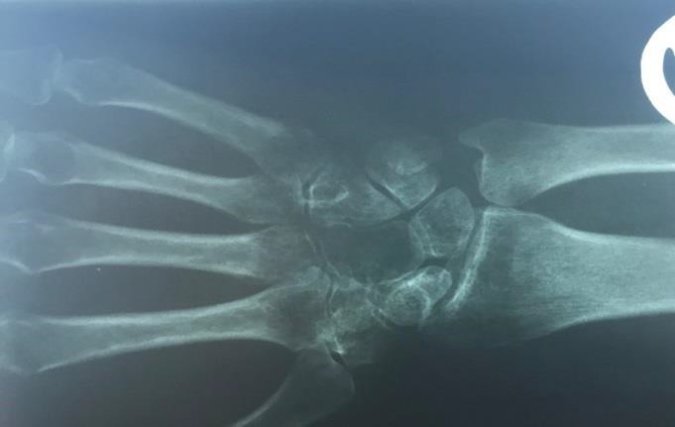 Figure 1. Conventional radiography of wrist showing decreased density in entire of the capitate bone without any evidence of collapse or sclerosis 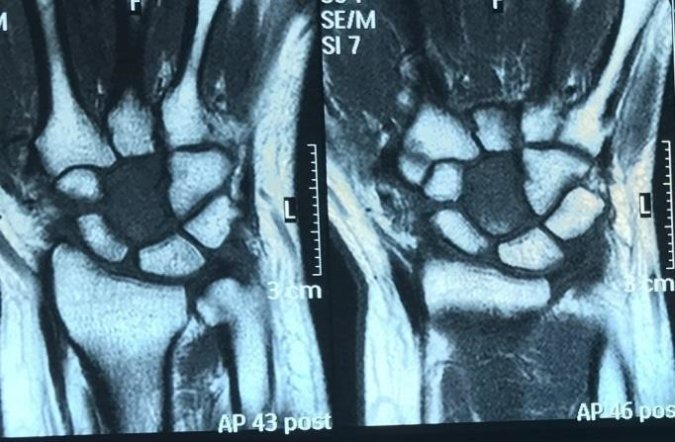 Figure 2. Coronal magnetic resonance imaging (MRI) of the left wrist. The capitate has an entire area of low-signal intensity on T1-weighted without contrast. 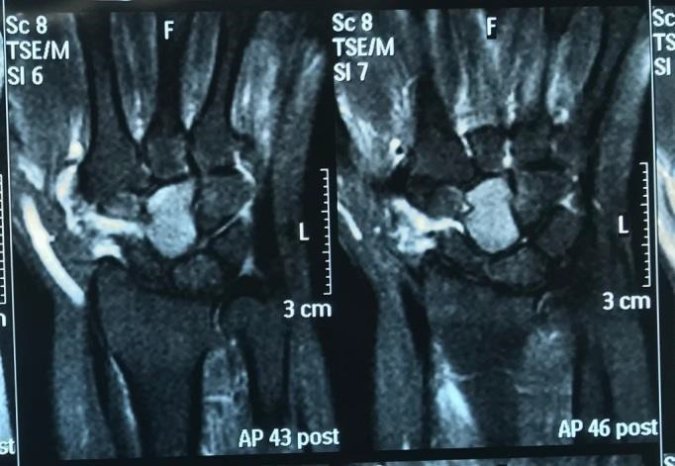 Figure 3. Coronal magnetic resonance imaging (MRI) of the left wrist. The capitate has high-signal intensity on T2-weighted without contrast.

Finally, he was recommended to change his job and left comfort wrist splint was prescribed for him for 2 months. To control the pain, a nonsteroidal anti-inflammatory drug (NSAID), celecoxib 200 mg, was prescribed twice a day for two weeks. After two months, the pain was resolved and permanent job change was proposed.

Capitate bone necrosis would occur due to blood supply blockage. Different etiologies have been mentioned for AVN including fractures or dislocation in wrist, diabetes mellitus (DM), decompression sickness, surgery, steroid injection on wrist, alcoholism, irradiation, and tumor.² It is mostly due to direct wrist trauma, especially when capitate and scaphoid fractures occur simultaneously which is called naviculocapitate syndrome.3 However there are some reports of capitate AVN with no history of trauma.² These reported observed cases in clerical workers, a paint sprayer, a carpenter, and a gymnast. AVN could also occur in capitate bone due to repetitive motion trauma as the result of blood supply disturbance.2,3

Hand blood circulation happens in two pathways. The first one is extrinsic blood supply through ulnar and radial arteries whose common branches form palmar carpal branch and is one of the nutritional pathways of capitate bone. The other one is intrinsic (intraosseous) and is related to anterior interosseous artery.3,5 Both blood supplies of capitate bone occur through palmar section. Therefore, if palmar aspect is exposed to any type of pressure or stress, the blood supply will be affected. Moreover, extrinsic blood supply is related to wrist capsular and ligamentous structures including flexor retinaculum and flexor pollicis longus tendon.2,3 Any injuries in these structures, especially in palmar side, could result in disturbing the capitate bone blood supply. The tip of capitate bone has no collateral blood supply.³ Hence, it is more prone to AVN. All the mentioned blood supply pathways are through proximal pole. Thus, the vascular supply to the proximal pole of the capitate is tenuous, and analogous to the vascular supply to the scaphoid.³

In our presented patient, MRI findings were in the form of low-signal intensity lesion on T1-weighted; like the other studies. Radiography did not help in the first stages of the disease. Moreover, based on blood supply of capitate, it seemed that continuous repetitive motion of wrist in long term had affected the blood supply condition of the capitate bone. A huge amount of force exerted by air compressor jack hammer to the wrist could be the main reason for capitate bone AVN.  AVN of capitate is the only wrist bone AVN with high correlation with job of the patient. Based on the published reports, several occupations have shown association with AVN of capitate bone including carpenters, pallet car drivers, construction laborers, bus conductors, warehousemen, pneumatic tool users, and vibrating tool users.3,4,7 Our patient was exposed to continuous vibration pressure of air compressor jack hammer which resulted in AVN in capitate bone; this is the first report on the relationship of the mentioned job with this disease. In the first stages, before bone changes, changing the job and wrist immobilization by splint could be helpful in controlling the symptoms.