Influenza vaccination is considered  the most effective measure to prevent health care-associated transmission of the disease, which causes risks for both patients and health care workers (HCWs). However, vaccination coverage among HCWs remains suboptimal. According to the US Centers for Disease Control and Prevention (CDC), 80% of immunization coverage is required to prevent transmission of influenza in health care facilities to a safe level. [1]

Different measures and strategies have so far been recommended to increase the vaccination coverage in HCWs including non-mandatory and compulsory policies, with particular emphasis on hospital campaigns, educational activities, and free vaccination as well as use of declination form, monitoring compliance level and giving feedback to leaders. [1-4] Reports on mandatory policies [2] have shown an increase over 90% of coverage in HCWs; nevertheless, the possible interference with personal autonomy constitutes concerns. Religious and medical or non-medical reasons are also frequently referred as cause of refusal. At the Cuban Hospital, Dukhan, Qatar, a 75-bed secondary care center, the  vaccination rate achieved was 61.7% and 71.1% with better compliance in nurses during 2011–2012 and 2012–2013. [3] To determine the effect of a multifaceted program in the vaccination coverage, we conducted this before-after study on physicians, nurses, and technologists working in this center. The intervention was approved by the Corporate Immunization Program  and an Institutional Review Board and implemented during the vaccination campaign (October–November, 2015). The proposed goal of our program was to achieve 90% coverage.

The program consisted of the following components:

Compared with the previous campaign (2013–2014), the new interventions were the group educational sessions, reporting on the immunization rate, and use of the declination form. No penalties or sanctions were applied to those who refused the vaccination.

Data about influenza vaccination of HCWs were available in the Infection Control  Department  vaccination  registries. A previous report was published on two previous seasons. [3] The annual vaccination rate was defined as the number of HCWs vaccinated divided by the total number of HCWs (per 100 HCWs). 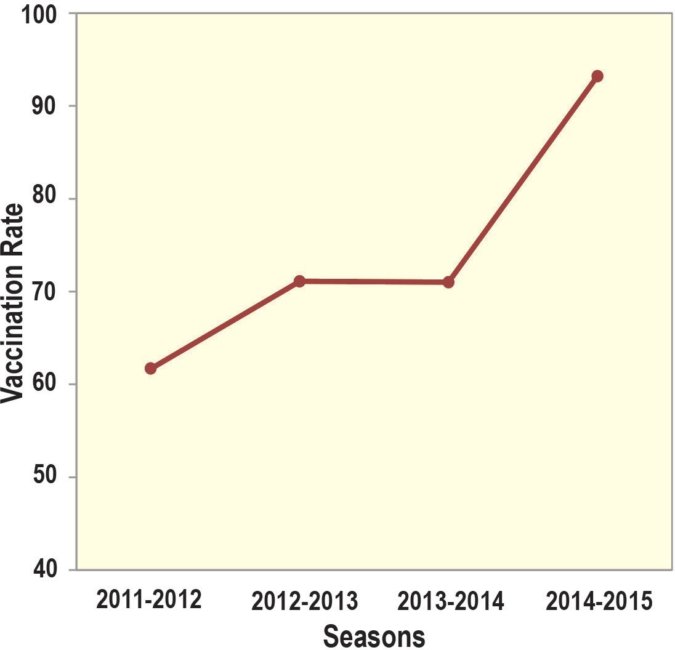 The declination form was completed by 28 HCWs including four who had not received the vaccine because they were on leave at the time of vaccination campaign. More than half (55.5%) of refusals were due to medical reasons, mainly severe allergy to egg or others vaccine components.

The intervention implemented resulted in a significantly improvement in vaccination coverage rate in HCWs. This will further reduce the health care-associated transmission of influenza. Although it is not possible to measure the particular contribution of each measure in a multi-faceted program, the introduction of declination forms, feedback to leaders, and the improved educational sessions were the main contributors.

The use of declination has been associated with an increase in vaccination rate in many settings. [5] Polgreen, et al, demonstrated an increase of 11.6% in 22 US hospitals without negative consequences for HCWs who refused to sign the forms. [5] During our intervention, we received the full commitment of the leaders and heads of departments; that was an important advantage to achieve the results. Strongly related with this were monitoring of compliance and giving feedback to leaders, implemented on weekly basis during our campaigns. The main purpose of such adopting such strategy was to remind those HCWs pending to receive the shot and to do additional educational actions, more at personal level.

It is important to emphasize that although our results would be considered acceptable, because was achieve the goal of 90%, many of the refusals reported did not have a proper justification, mainly those who referred to non-medical causes. These could be overcome with more staff education and better analysis of the refusals. Honda, et al, [2] achieved more than 90% of coverage with a non-mandatory policy; those employees not vaccinated were interviewed to identify the reasons and either accepted the vaccination or completed the declination form. On the other hand, mandatory programs have well-known limitations, already mentioned, but achieved better results. [2]

It is important to consider the amount of the employees in small facilities that would facilitate the implementation of the immunization program. Our finding has shown the potential for improvement with the comprehensive immunization program and the need for continuing our efforts to protect our patients and our HCWs.