An Introduction to understanding Extracorporeal Membrane Oxygenation (ECMO) in adults 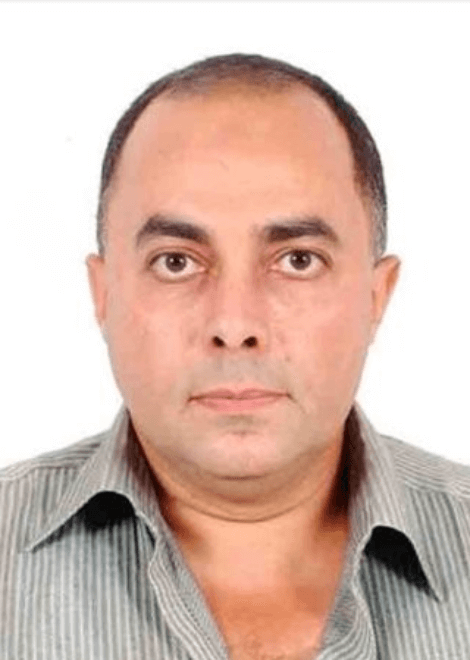 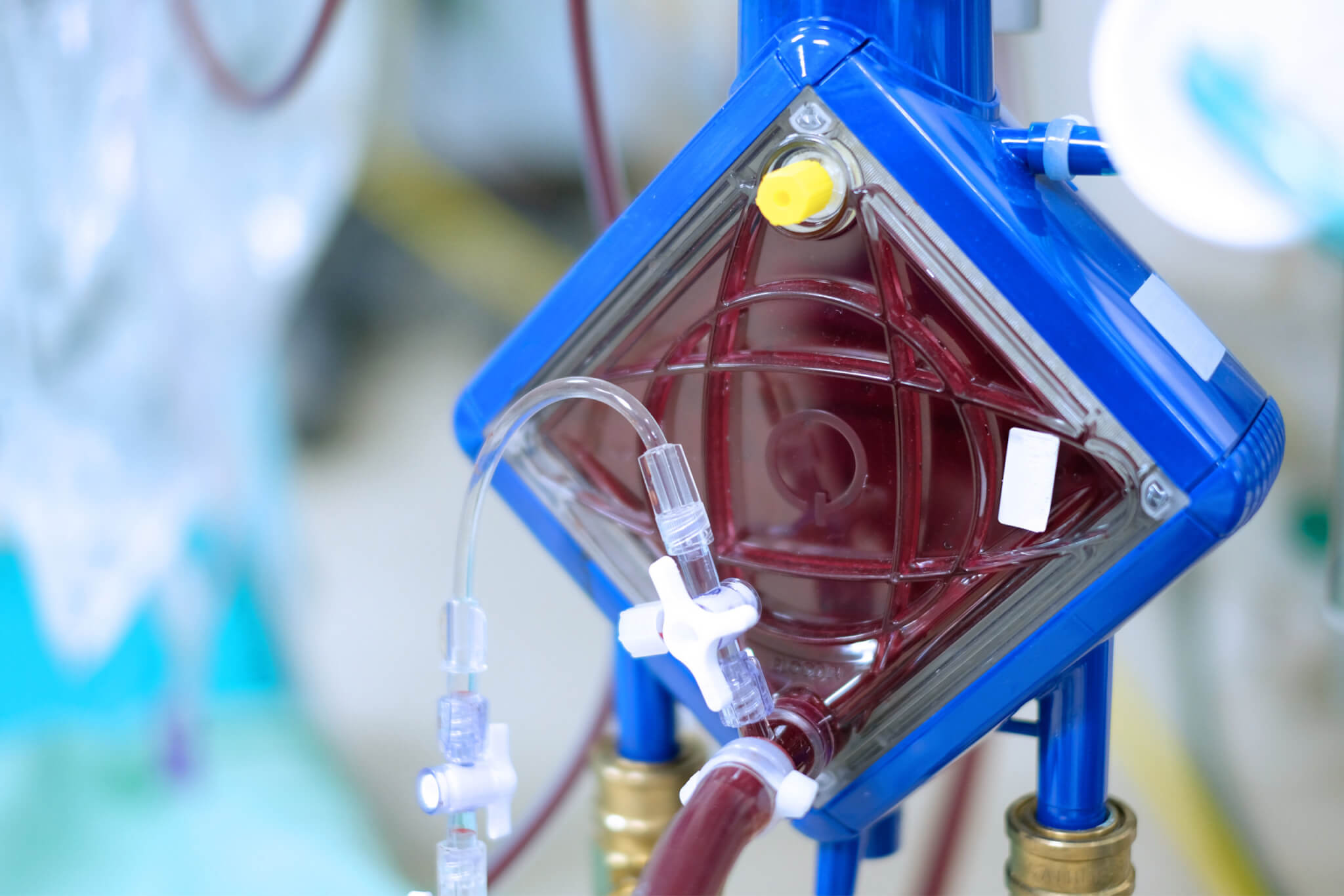 Veno-arterial ECMO (VA ECMO) is similar to the heart-lung machine and provides cardiac and pulmonary support for patients in cardiogenic shock.

The survival of patients undergoing ECMO can be categorized according to the indication for the ECMO: severe acute respiratory failure or cardiac failure.

Acute respiratory failure — Multiple studies have evaluated the effect of ECMO on mortality in patients with severe acute respiratory failure. The potential benefit from ECMO should always be weighed against the risk of transfer. In experienced ECMO centers, approximately 25 percent of patients will improve and recover without ECMO, while 75 percent of patients will require ECMO. Among those who require ECMO, 60 to 70 percent will survive.

Cardiac failure — Venoarterial (VA) ECMO can provide acute support in cardiogenic shock or cardiac arrest in adults. Assuming that the brain function is normal or only minimally impaired, ECMO is provided until the patient recovers or receives a long-term ventricular assist device as a bridge to cardiac transplantation.

Observational studies and case series have reported survival rates of 20 to 50 percent among patients who received ECMO for cardiac arrest, severe cardiogenic shock, or failure to wean from cardiopulmonary bypass following cardiac surgery and including older adults.

ECMO can be venovenous (VV) or venoarterial (VA):

Initiation — Once it has been decided that ECMO will be initiated, the patient is anticoagulated (usually with intravenous heparin) and then the cannulae are inserted. ECMO support is initiated once the cannulae are connected to the appropriate limbs of the ECMO circuit.

Cannulation — Cannulae are usually placed percutaneously by Seldinger technique. The largest cannulae that can be placed in the vessels are used.

Femoral access is preferred for VA ECMO because insertion is relatively easy. The main drawback of femoral access is ischemia of the ipsilateral lower extremity. The likelihood of this complication can be decreased by inserting an additional arterial cannula distal to the femoral artery cannula and redirecting a portion of the infused blood to the additional cannula for “reperfusion” of the extremity. Alternatively, a cannula can be inserted into the posterior tibial artery for retrograde flow to the extremity.

Occasionally, the femoral vessels are unsuitable for cannulation for VA ECMO (eg, patients with severe occlusive peripheral artery disease or prior femoral arterial reconstruction). In such circumstances, the right common carotid artery or subclavian artery can be used. In our experience, there is a 5 to 10 percent risk of a large watershed cerebral infarction when the right common carotid artery is used. Use of the subclavian artery offers the advantage of allowing patients on ECMO to ambulate.

For postcardiotomy ECMO, the cannulae employed for cardiopulmonary bypass can be transferred from the heart-lung machine to the ECMO circuit, with blood drained from the right atrium and reinfused into the ascending aorta.

Titration — Following cannulation, the patient is connected to the ECMO circuit and the blood flow is increased until respiratory and hemodynamic parameters are satisfactory. Reasonable targets include:

Maintenance — Once the initial respiratory and hemodynamic goals have been achieved, the blood flow is maintained at that rate. Frequent assessment and adjustments are facilitated by continuous venous oximetry, which directly measures the oxyhemoglobin saturation of the blood in the venous limb of the ECMO circuit. When the venous oxyhemoglobin saturation is below target, interventions that may be helpful include increasing one or more of the following: blood flow, intravascular volume, or hemoglobin concentration. Decreasing the systemic oxygen uptake by reducing the temperature may also be helpful.

Anticoagulation is sustained during ECMO with a continuous infusion of unfractionated heparin or direct thrombin inhibitor titrated to an activated clotting time (ACT) of 180 to 210 seconds. The ACT target is decreased if bleeding develops. ACT is easily determined at the point of care, but plasma PTT (1.5 times normal) can also be used. Thromboelastography is a useful adjunct. When heparin is used, the anticoagulant effect is dependent on the amount of endogenous antithrombin (AT3). If AT3 deficiency is suspected, the level can be measured. If less than 50 percent normal, AT3 is replaced by fresh frozen plasma. Less commonly, some specialized centers follow factor Xa levels. One review of 16 studies suggested that optimal targets vary among centers resulting in variable rates of bleeding and thromboembolism .

Platelets are continuously consumed during ECMO because they are activated by exposure to the foreign surface area. Platelet counts should be maintained greater than 50,000/microliter, which may require platelet transfusion.

The ECMO circuit is often the only source of oxygen in patients with complete cardiac or pulmonary failure. Oxygen delivery depends on the amount of hemoglobin and blood flow. The risks of high blood flow outweigh the risk of transfusion, so hemoglobin is maintained over 12 g/dL in ECMO patients.

Special considerations — VV ECMO is typically used for respiratory failure, while VA ECMO is used for cardiac failure. There are unique considerations for each type of ECMO, which influence management.

ECMO and the Kidney

AKI is a common complication in the adult ECMO patients. Using the risk, injury, failure, loss, and end stage or AKI Network criteria, 2 single-center studies showed an AKI incidence of more than 80% with close to half of affected patients requiring renal replacement therapy (RRT). Fluid overload (FO) in the general ICU patient with AKI is independently associated with higher mortality rate. FO similarly compromises the cardiac and/or pulmonary functions in the ECMO patient and therefore current guidelines recommend achieving and maintaining euvolemia once the hemodynamics are stabilized . An international survey reported that treatment and prevention of FO are critically important indications for using RRT in conjunction with ECMO.

One or more trials of taking the patient off ECMO should be performed prior to discontinuing ECMO permanently: 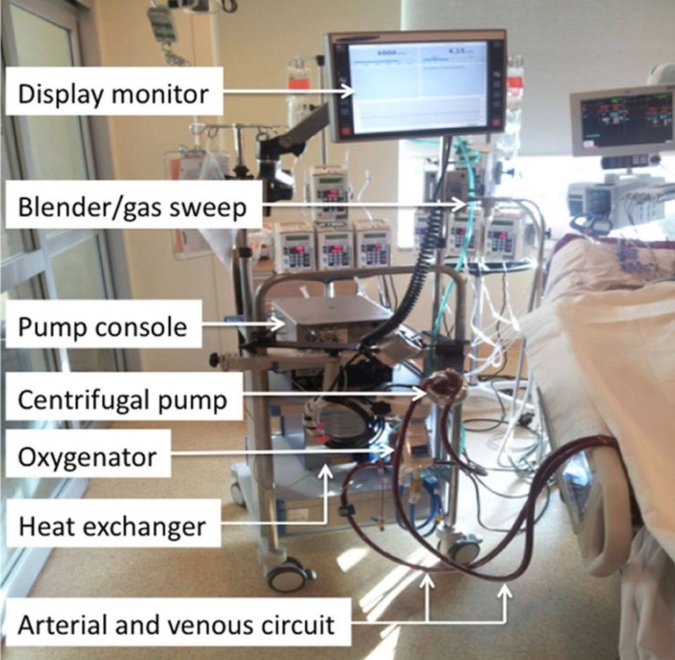 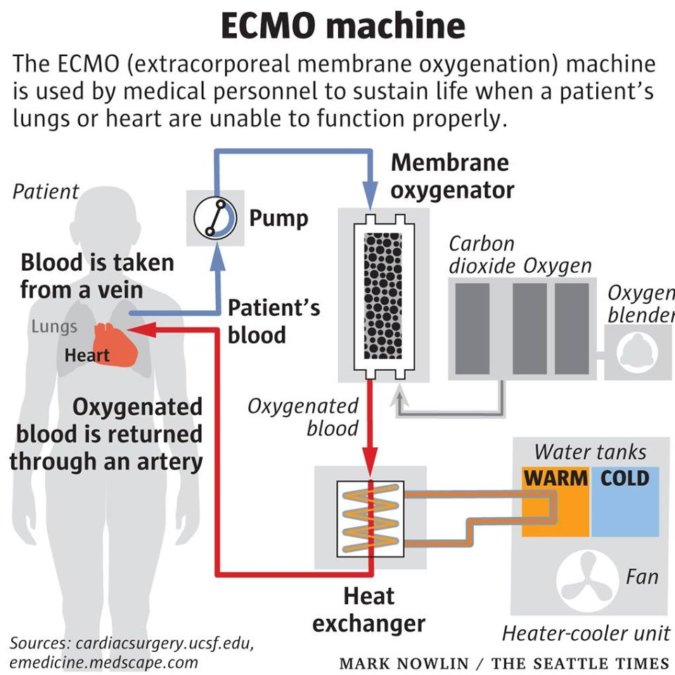 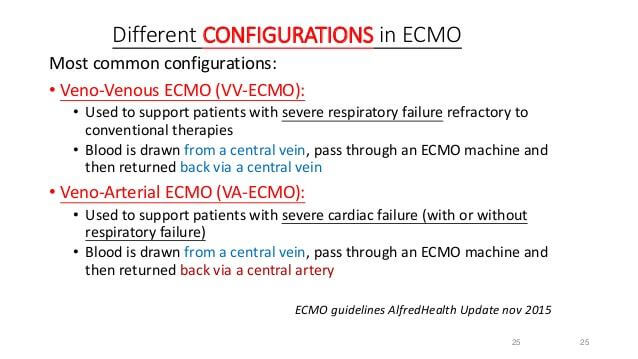 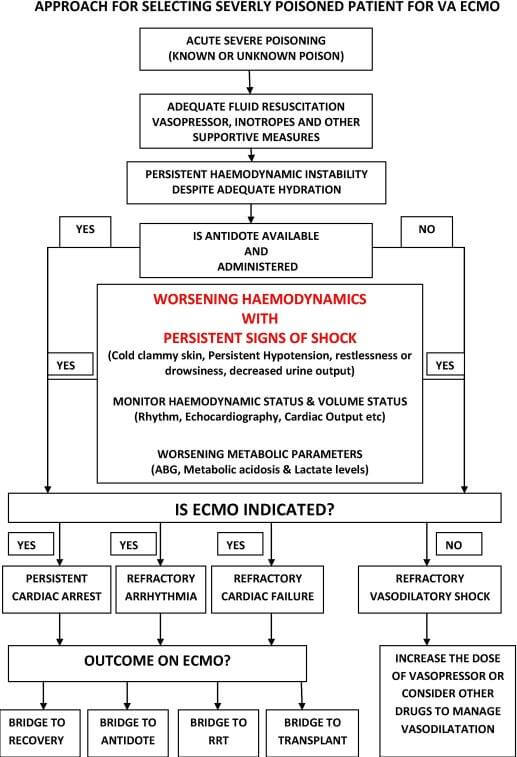 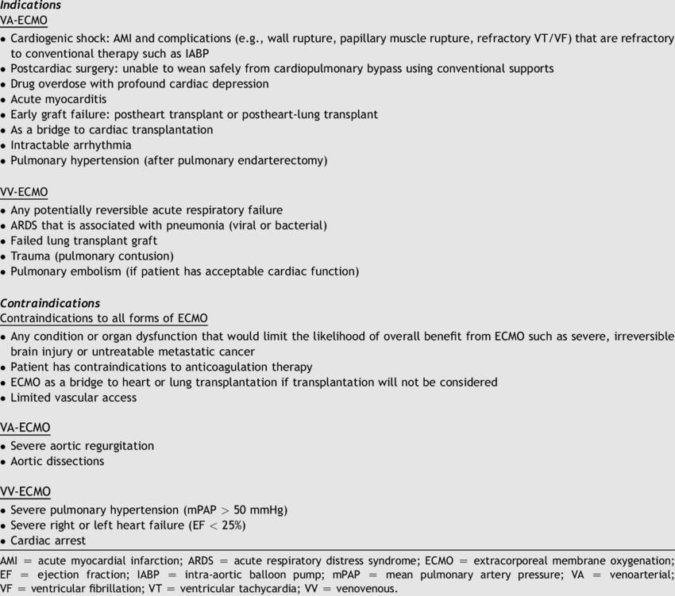 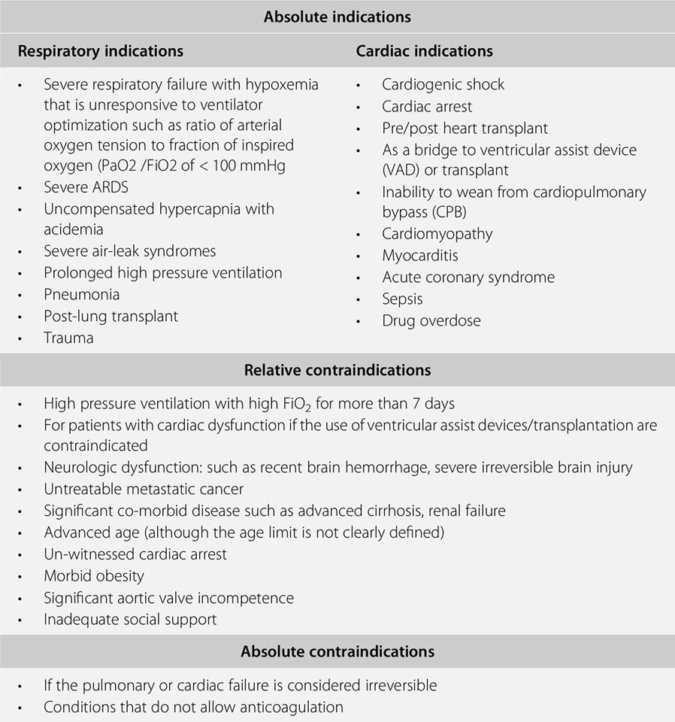 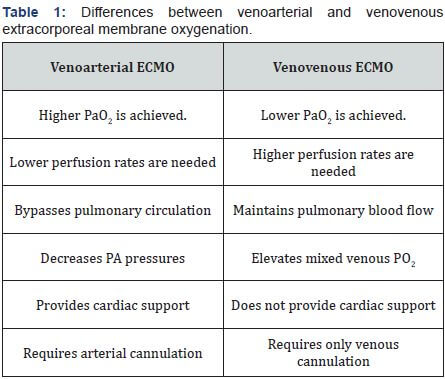 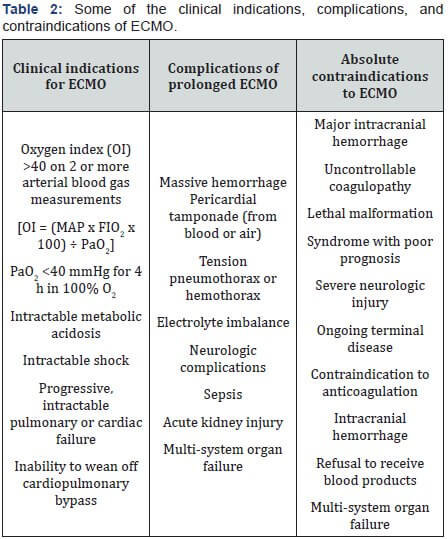 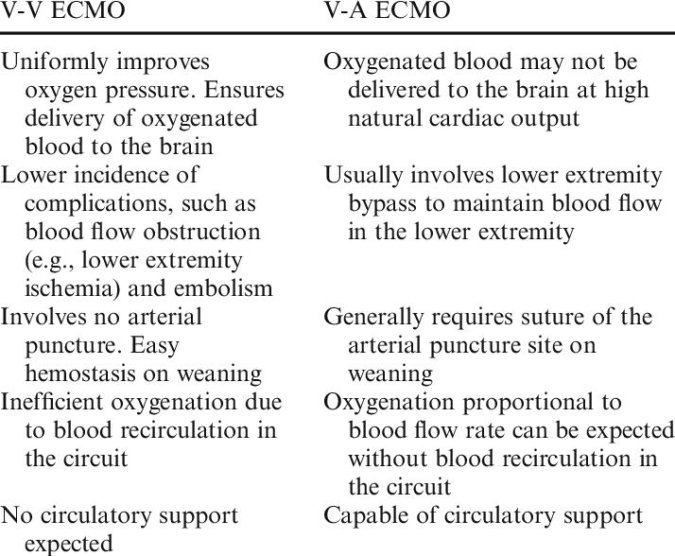 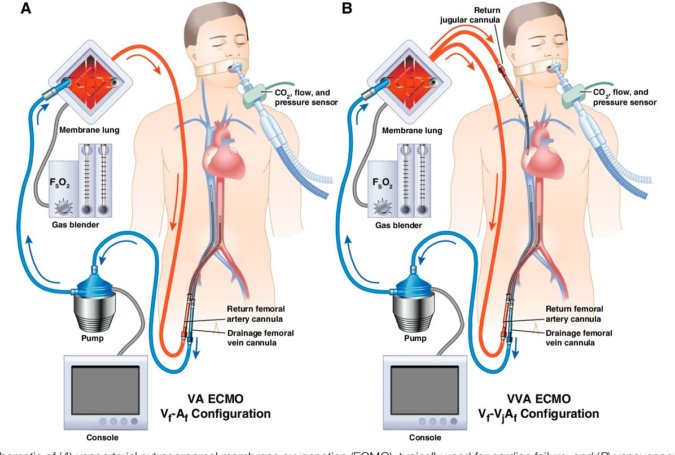 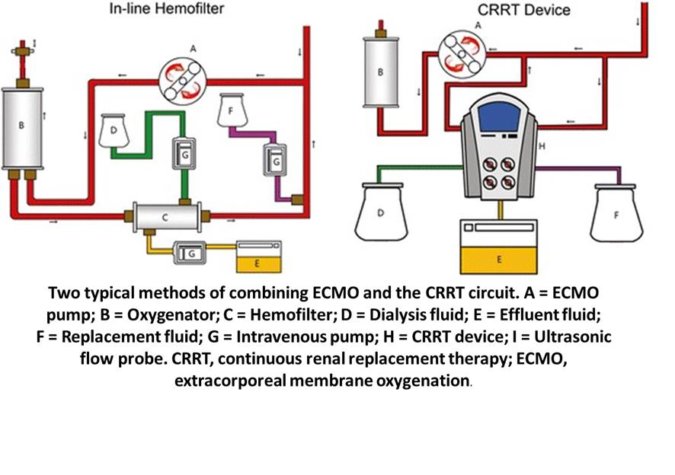 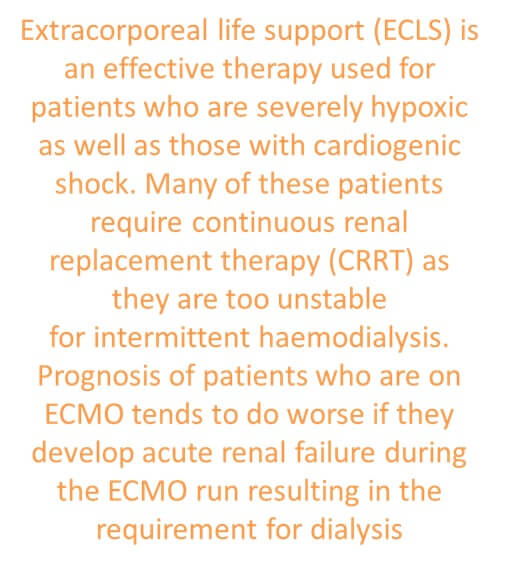 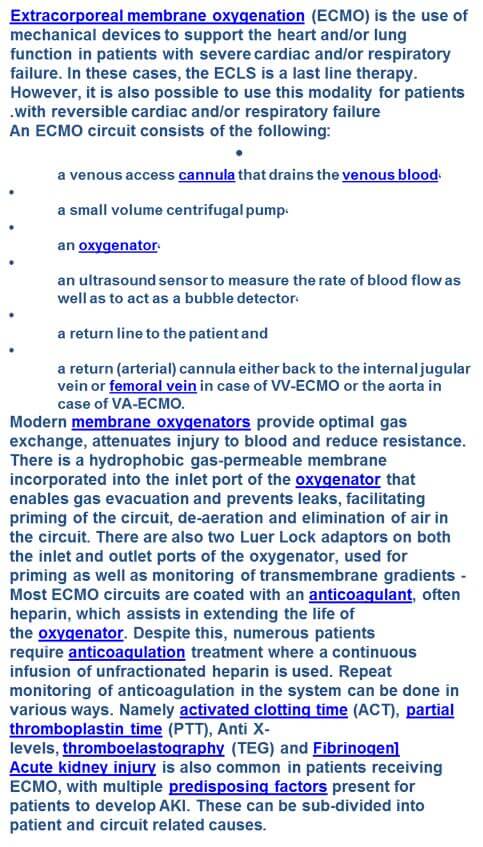 Genetics and Pathophysiology of Maturity-onset Diabetes of the Young (MODY): A Review of Current Trends
Sacubitril/Valsartan in Management of Heart Failure: A Review of Safety, Efficacy and Cost-Effectiveness
Impact of Electronic Cigarette on Public Health
Evaluation of the endoscopic findings in patients with dyspepsia
Hospitalization Rates and Characteristics of Patients Hospitalized with Laboratory-Confirmed Coronavirus Disease 2019
Share your articles so others can learn from you*