Subglottic stenosis (SGS) is a narrowing of the soft tissue just below the vocal cords. It can be subdivided into congenital and acquired. The acquired type is more commonly encountered than the congenital one, and it is mostly iatrogenic in origin. Although the leading cause of acquired SGS is prolonged intubation, it can be a result of trauma or severe infection. There are plenty of management approaches of SGS, endoscopic versus open surgical ones. Tracheostomy is usually needed in severe cases to secure the airway before the definitive treatment.

The aim of this paper is to report a challenging airway reconstruction. However, the most important part is shedding light on the reason that led to airway compromise to avoid it along with its catastrophic consequences.

A 4-year-old, tracheostomized girl with a history of multiple abdominal surgeries and continuous endotracheal intubation for 3 months visited a referral center. The patient developed SGS and underwent tracheostomy. The family visited a leading pediatric center and was informed that “the voice box is extremely scarred, so it is not possible to remove the tracheostomy wherever surgery is carried out.” A computed tomography (CT) scan was ordered and showed a subglottic narrowing 21.8 mm in length with a minimal slit-like luminal diameter of 1.6 mm. It was mainly subglottic with a patent clear trachea (Fig. 1). Direct laryngotracheoscopy under general anesthesia demonstrated severe SGS grade 3 about 2 cm in length and linear in shape (Fig. 2). 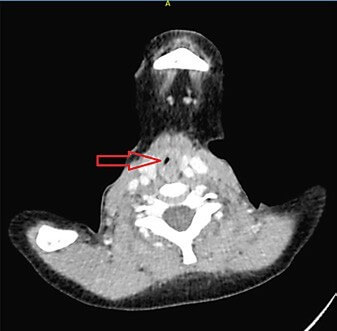 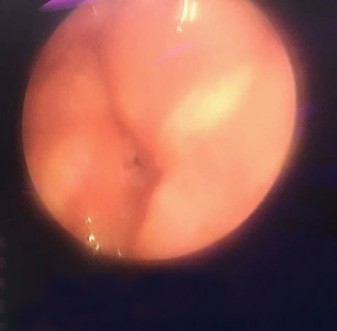 After discussion with the family and exploring the possible treatment options, it was decided to proceed with surgery.

Laryngotracheoplasty was carried out, starting with a graft harvested from the marginal costal cartilage with preservation of the outer perichondrium. The medial perichondrium was kept on the chest to protect the pleura. After a horizontal neck incision above the stoma and subcutaneous dissection, a laryngotracheal fissure was done to involve the lower half of the thyroid cartilage, cricoid, and upper three rings of the trachea. Due to severe SGS (grade 3), the decision was to split the posterior cricoid lamina and to fix the graft to the anterior wall of the trachea with its perichondrium towards the new lumen. A tracheostomy tube No. 5 was used as a stent and fixed by a Prolene suture at the bottom.

Three months later, the stent was removed under general anesthesia. The graft was intact, but extensive granulation tissue was noted (Fig. 3). This was managed by high-dose antibiotics and a steroid regime. One week later, endoscopy was carried out using a rigid endoscope and showed patent airways up to the carina with normal mucosa (Fig. 4). After serial episodes of endoscopic assessment showing a wide subglottic area, the decannulation process started. On a regular follow-up, the patient was found to do well, eating and breathing normally even during play and exercise. At the time of writing this article, 15 months had passed since decannulation, and the patient has not reported any symptoms of breathing difficulties. 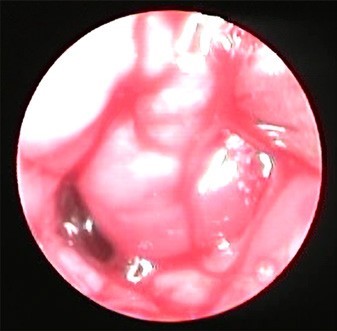 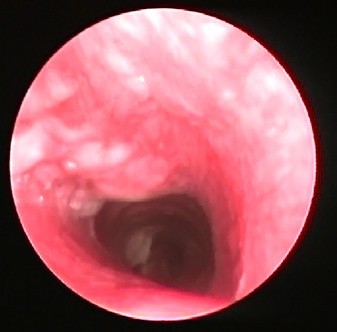 SGS could be congenital or acquired, and the vast majority of SGS cases in the 19th century were due to specific infections such as syphilis, tuberculosis, diphtheria, and others.

In the 1960s and 1970s, the incidence of acquired SGS increased significantly. It is thought that this was due to the increased practice of prolonged neonatal intubation. This situation urged surgeons to study the relations between intubation and stenosis incidence and to look for new techniques to manage this condition [1, 2].

In the 1990s, the incidence of SGS dropped dramatically. A report from the Children’s National Medical Center in Washington published in 1998 showed that only 1–2% of the children admitted to the NICU devel- oped SGS [3].

It has been observed that endotracheal intubation causes injury and remarkable changes in the lining mucosa and perichondrium of the cricoid cartilage, starting with edema and congestion that may develop to microscopic necrosis. With prolonged intubation, further perichondrium exposure could happen. A fibrotic scar results in case of infection upon the exposed area. These events are accelerated when a larger tube is used.

SGS usually manifests with biphasic stridor; however, glottic and SGS might present in the same way. Indication of surgical intervention is based upon the severity of symptoms rather than the grade of stenosis. Myers and Cotton [4] classified this stenosis into four grades according to the extension of obstruction:

Often, grades I and II do not require surgery. This is also the case when the symptoms are sporadic and can be treated medically. However, when symptoms persist, and the frequency or severity of stridor increases, surgery should be considered.

Endoscopic assessment is the cornerstone in the evaluation of airway obstruction. Flexible fiberoptic nasoendoscopy can be tried first. It is a simple, office-based procedure with the advantage of vocal cord mobility assessment; however, its visualization of the subglottic area is not optimal.

Rigid endoscopy under general anesthesia is superior to flexible endoscopy in the assessment of laryngeal stenosis and the bronchial tree. It is of paramount importance to have a full set of instruments during the procedure (laryngoscopes, bronchoscopes, telescopes, camera, light source, etc.) and to maintain proper communication with the anesthesiologist. The assessment should include the supraglottis, glottis, and subglottis, looking for edema, granuloma, and signs of GERD. The surgeon should also document the length, thickness, and maturity of stenosis in addition to stage as per Cotton-Myer classification [4].

Radiologic studies usually start with a plain X-ray of the neck (anteroposterior and lateral views), and SGS appears peaked with the pathognomonic “steeple” sign. Barium swallow might be requested to rule out GERD and vascular abnormalities, keeping CT and magnetic resonance imaging for the more advanced and complicated cases.

The treatment of SGS could start medically. If the stenosis is in an early stage and is not fibrosed yet, oral or inhaler steroids can be helpful during this period by managing inflammation. Once the stenosis gets scarred and becomes mature, medical treatment is ineffective. However, treatment of GERD is mandatory even when surgical intervention is planned.

There is a wide spectrum of surgical interventions, ranging from endoscopic procedures to open reconstruction to cricotracheal resection. Endoscopic procedures are often indicated in mild and immature stenosis. Quesnel et al. [5] described the usage of CO2 laser endoscopically in circumferential subglottic cases by making four incisions followed by dilatation. Some surgeons use medications in endoscopic procedures: steroid injection and/or topical mitomycin C application.

Mitomycin is antiproliferative, working by blocking fibroblast division and activity. In 2005, Hueman and Simpson [6] studied the side effects of mitomycin application and found that 4.7% of the cases got fibrin debris at the surgical site, and no significant systemic adverse effects.

Balloon dilatation is another tool that can be used endoscopically. However, the outcomes in advanced stages (grades 3 and 4) are far less successful than open reconstruction [7].

Open surgical approaches are often tailored as per extension of the stenosis, thickness of the scar, and status of the surrounding tissue. The aim of these surgeries is to decannulate the child and preserve his/her voice.

In 1991, laryngotracheoplasty was first described by Seid et al. [9]. It includes fixation of part of the cartilage into the split area instead of leaving it to fibrosis. Expanding the laryngeal lumen using cartilage has significantly increased the chance of extubation. This was confirmed by Richardson [10] who compared the success rate when a cartilage graft was used (90%) versus leaving the split area without cartilage (56%) in infants <6 months with acquired stenosis.

For more complicated and advanced stages of steno- sis, further grafting of the posterior lamina of the cricoid cartilage was suggested. Decannulation was successful in more than 90% of the operated cases using this method, with rare need for further surgery as Zalzal and Cotton [11] reported.

Often, during tracheostomy a stent is placed that lasts for 4–6 weeks. After stent removal, endoscopic assess- ment of the airways using a rigid endoscope is manda- tory before starting the process of decannulation.

Even with anterior-posterior reconstructions, some advanced stages of stenosis have failed to maintain adequate lumen. Monnier from Switzerland took a remarkable step in airway surgery by the introduction of cricotracheal resection with a successful decannulation rate of 97% in 31 children.

This surgery is indicated in patients with severe SGS, free glottis, and a minimum of 4 mm healthy mucosa between the vocal cords and stenosis. Due to expected edema, the airway should be secured with tracheostomy or a T tube for 4–6 weeks until all edema subsides.

Follow-up bronchoscopy is often done within 1–3 weeks after surgery to evaluate the patency and restenosis of the airways.

Zalzal et al. [12] studied the etiology of failed reconstruction in 27 cases and found that reasons for failure are (a) improper selection of a graft and/or stent; (b) the stent gets removed too early; (c) poor preoperative evaluation and postoperative care; (d) active reflux; and (e) keloid.

Outcomes of airway reconstruction are mainly determined by the severity of stenosis and the surgery performed. Generally, the successful decannulation rate is about 80–90% when the surgery and patient are properly selected.

Choi and Zalzal [13] reported that the age of the child is an important factor in failed reconstruction; children<2 years are at a higher risk for subglottic scars than others.

It is thought that the surgical options of airway reconstruction have been explored, and now it is time to investigate absorbable stents and to study new medications that can interfere with growth factors and prevent restenosis.

The catastrophic situation of the girl presented herein resulted from prolonged intubation without suggestion for tracheostomy. So, it is important to consider tracheostomy whenever long-term ventilation is planned, with selection of a proper tube and good fixation.

We are not sure if our patient’s body reacted to our endotracheal tube or the tube was moving, resulting in granulation tissue. Since the trachea was full of granulation tissue, particularly on the posterior wall, the decision was made to try high-dose antibiotics and steroids to avoid an aggressive surgery that might have resulted in tracheoesophageal fistula.

Fortunately, the treatment of our patient was successful and did not require further surgery. So, it is a very good alternative that could also work in similar cases. Careful investigation and a proper management plan led to a favorable result. Hence, our patients deserve all our efforts and passion without losing hope.

Unleashing the immune system’s ‘STING’ against cancer
Fighting cancer with rejection-resistant, ‘off-the-shelf’ therapeutic T cells
A metabolic enzyme as a potential new target for cancer immune therapies
Genetics and Pathophysiology of Maturity-onset Diabetes of the Young (MODY): A Review of Current Trends
Epidemiology of COVID-19 Infection in Oman: Analysis of the First 1304 Cases