Primary hyperparathyroidism (PHPT) is characterized by excessive secretion of the parathyroid hormone (PTH) and is the most common cause of hypercalcemia in ambulatory patients. Parathyroid adenoma is the underlying cause  in 85% of patients with PHPT; however, parathyroid malignancies are rare, occurring in <0.5% of all cases.[1] About 75%–80% of PHPT patients are asymptomatic. Its clinical manifestations are secondary to hypercalcemia and include renal calculi, overt bone disease, nonspecific gastrointestinal symptoms as well as cardiovascular and neuromuscular dysfunction.[2,3]

Pancreatic disease in PHPT can present as acute pancreatitis (AP); recurrent AP (RAP) with no evidence of chronic pancreatitis (CP); CP with no calcification; chronic calcific pancreatitis; or PHPT complicated by AP in the postoperative period.[9] Recurrent abdominal pain is the most  common  manifestation  of  the  life‑threatening AP with PHPT. CP with PHPT is also characterized by recurrent abdominal pain along with exocrine insufficiency and endocrine dysfunction.[14,15] There is significant morbidity and mortality associated with pancreatitis. However, treating the underlying cause of hypercalcemia and surgical management of parathyroid adenoma can help in the management of PHPT‑associated pancreatitis.[13]

This retrospective study included patients who presented with AP, RAP or CP and were subsequently found to have parathyroid adenoma, for which they underwent parathyroidectomy at Asian Institute of Gastroenterology, Hyderabad, India, between April 2010 and June 2016. Patients with pancreatitis due to other causes such as alcohol, gallstones, hypertriglyceridemia and medications were excluded from the study.

Diagnosis of  AP was based on any 2 of  the following 3 criteria:[16] (1) abdominal pain (acute onset of a persistent, severe, epigastric pain, often radiating to the back); (2) serum lipase activity and/or serum amylase levels at least three times greater than the upper limit of normal; (3) characteristic findings of AP on imaging (contrast‑enhanced  computed  tomography,  magnetic resonance imaging or transabdominal ultrasonography).

The occurrence of two or more documented episodes of AP without any pain in the interim period and without any features of CP was considered as RAP. CP was diagnosed when imaging showed dilated pancreatic duct, pancreatic ductal calculi, atrophy of pancreas, irregular gland margins and/or changes in the pancreatic parenchymal echotexture.

Ethical approval for this study (AIG/IEC28/04‑2017‑05) was provided by the Institutional Ethical Committee of Asian Institute of Gastroenterology, Hyderabad, India, on April 05, 2017.

A total of 3962 patients presented with RAP or CP between April 2010 and June 2016. Of these, 77 (1.94%) patients had hypercalcemia and were found to have parathyroid adenoma on evaluation for the etiology of pancreatitis, and thus were included for further analysis. Of these 77 patients, 47 (61%) were males, and the mean age was 36.3 ± 16 years. Seventeen (22.1%) patients had hypertension, 12 (15.6%) type 2 diabetes mellitus and 22 (28.6%) renal calculi, which was an incidental finding. In all these patients, abdominal pain was the presenting complaint.

Eleven patients with CP had pancreatic ductal calculi and underwent extracorporeal shock wave lithotripsy and endoscopic retrograde cholangiopancreatography. Number of patients with renal calculi were significantly higher (P = 0.023) among those with CP than those with RAP [Table 1].

Serum calcium (12.4 ± 1.7 mg/dl) and parathyroid levels (367 ± 286.4 pg/ml) were elevated in all patients [Table 2], and there was a positive correlation between serum calcium and PTH levels [Figure 1]. There was no significant difference in the serum calcium levels among patients with RAP and CP (P = 0.80). Similarly, although the serum PTH levels were higher in patients with CP than those with RAP, this difference was not statistically significant (P = 0.3) [Table 1]. Serum 25‑OH vitamin D levels were normal in all patients (27.8 ± 9.4 ng/ml), except among those (12 patients) in whom vitamin D deficiency was already implicated as the cause for PHPT. 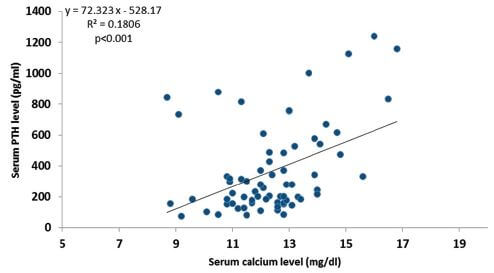 After parathyroidectomy, patients were followed up from 3 months to 5 years. There was a significant reduction in serum calcium and PTH levels 1 week after parathyroidectomy (for both, P = 0.0001) [Table 2]. Patients with RAP and CP who underwent extracorporeal shock wave lithotripsy and endoscopic retrograde cholangiopancreatography had no further episodes of pain. The severity and frequency of pain episodes was also reduced for all other patients with CP.

The association between pancreatitis and PHPT was first reported in 1947.[19] Hypercalcemia, which is mainly secondary to PHPT, is a rare but well‑recognized cause of AP and CP. However, the prevalence of  pancreatitis in patients with PHPT has been reported to vary (1.5%–13%).[4‑11] Although many studies suggest an association between PHPT and pancreatitis, it remains controversial. Earlier studies from India have found the incidence of PHPT‑associated pancreatitis to be between 6.8% and 12%.[9] However, in patients with PHPT and the resulting hypercalcemia, the incidence of pancreatitis is 10–20 times higher than the general population.[20] In 1962, Mixter et al.[21] reported 62 cases of PHPT‑associated pancreatitis. The current study retrospectively analyzed the data of 77 patients who presented with RAP (n = 41) and CP (n = 36) and were later found to have hypercalcemia and PHPT due to parathyroid adenoma. To the best of the authors’ knowledge, to date, this is the largest study of parathyroid adenoma‑associated pancreatitis.

About two‑thirds of the 77 patients in the current study were males. This finding is in agreement with that of Carnaille et al.[6] and Jacob et al.,[9] who found that PHPT‑associated pancreatitis was more common in males, with a male:female ratio of 2:1. Similarly, Shah et al.[22] found pancreatitis to be more common among male symptomatic PHPT patients. On the contrary, with PHPT without the associated pancreatic disease, there is a female preponderance.[22]

There was a positive association between the serum calcium and serum PTH levels in this study. The simultaneous increase in the levels of both clearly indicates that hypercalcemia was caused by PHPT. In PHPT patients with sufficient vitamin D reserve, hypercalcemia occurs as a result of increased absorption of calcium from the intestines.[26] Hypercalcemia causes de novo activation of trypsinogen to trypsin, which results in acinar cell damage, autodigestion of the pancreas and, subsequently, pancreatitis.[12] PHPT patients with hypercalcemia have a 1.3 times higher risk of developing pancreatitis.[22] Hypercalcemia can also lead to pancreatic calculi and protein plug formation by altering pancreatic secretion, resulting in ductal obstruction that leads to subsequent attacks of RAP or CP.[27] Apart from calcium, genetic predisposition may also lead to AP in patients with PHPT.[28]

In this study, after parathyroidectomy, there was a significant reduction in the serum calcium and parathyroid levels in all patients. In addition, the number of episodes and the severity of abdominal pain reduced in patients with CP. Therefore, parathyroidectomy improved the clinical outcomes of PHPT and, possibly, prevented further attacks of pancreatitis. Similarly, Diaconescu et al.[29] showed that postoperative clinical and humoral outcome was favorable in all patients with parathyroid adenoma. Following parathyroidectomy, which is the definitive treatment for PHPT, PTH levels normalize within 30 h, while the serum calcium concentration reaches its lowest point in about 24–36 h.[30] With the eventual normalization of the serum calcium levels, there is no premature activation of trypsinogen to trypsin in the pancreatic acinar cells, thereby preventing further attacks of pancreatitis.

A limitation of this study was that the authors evaluated patients who presented with pancreatitis and were later found to have hypercalcemia and parathyroid adenoma, because of which the study could not estimate the burden of PHPT. To provide a better estimation of PHPT burden and morphology, future studies should include patients with hypercalcemia/parathyroid adenoma who subsequently develop pancreatitis.

Estimation of serum calcium after an episode of unexplained pancreatitis is very important and would help minimize the delay in diagnosing PHPT and possibly prevent the progression of pancreatitis. Parathyroidectomy improves the clinical outcome of PHPT and prevents further attacks of pancreatitis.