The third leading cause of death in the world is stroke, leaving survivors with varying disabilities.[1] Stroke is one of the most debilitating neurological disorders worldwide; 5.5 million dies yearly and 44 million experience varying disability.[2] As stroke is more prevalence among aged people, its prevalence is expected to increase in the future as population trend in Saudi Arabia is young predominance which accounts for low incidence of rate of stroke.[3]

One of the biggest countries in Arabian Peninsula, Kingdom of Saudi Arabia, covers 2,150,000 km with a population of more than 28 million.[4] A survey on incidence of subtype of stroke has revealed 2.2% of subarachnoid hemorrhage and 79% of ischemic infarct.[5] Few more researches related to study the patterns, risk factors, diagnosis, and outcome poststroke among children revealed similar patterns.[6,7] One of the studies conducted in 1991 by Yaqub et al.[8] on the incidence of stroke revealed that majority of stroke patients had cerebral infraction (87%), only fewer had other types of stroke, e.g., cerebral hemorrhage (6.5%) and subarachnoid hemorrhage (4.5%), and the least was venous infraction which accounted for only 2%. As of now, only one study in 1998 by Al Rajeh and Awada[9] reported the approximate occurrence of stroke in Saudi Arabia is 29.8/100,000/year. The authors reported that ischemic stroke was more common than other forms of stroke. Therefore, a physiotherapist needs to perform evidence‑based practice (EBP) to be able to choose the best available approach and achieve the highest level of functional independence and social participation among people with stroke.

EBP involves the critical appraisal of best evidence got from high‑quality clinical research, to solve the clinical problems. There are three fundamental components of EBP:[10] (1) quality research, (2) clinical expertise, and (3) patient value. Implementing EBP in practice involves four steps that are (1) identification of an answerable clinical problem, (2) searching relevant research data and critical analysis, (3) utilization of the evidence present in the data, and (4) evaluation of the effectiveness. Although the process looks simple, the complexity of identifying relevant research evidence is often tedious for any health professional.

Systematic review research has shown that the structured multidisciplinary care and rehabilitation after stroke enhance patient functional ability and decrease the period of in‑patient stay.[11] It is however unclear why patients improve well in stroke units than in regular care center. A number of factors have been indirectly associated to greater improvement in stroke specialized units;[12] these include the comprehensive evaluation of medical problem, impairment, disabilities, and handicap; dynamic physiological assessment; early mobilization and prevention of complication arising from bed rest; and expert nursing care. Several of these factors are closely associated with physiotherapy, which is often observed as one of the key disciplines in organized stroke care.[13]

Over the past few decades, physiotherapists have shown a strong inclination toward professional accountability and implementing best evidence in their clinical practice.[14] They also utilize their explicit research evidence and nonresearch knowledge (tacit knowledge) in making clinical decisions. Now and then, newer physical therapy approaches with strong research evidence on efficacy and effectiveness appear in the scientific literature.[15,16] Knowledge of steps involved in EBP is essential for the physiotherapist to select the most effective and feasible treatment available. The purpose of this study was to explore the clinical practice of physiotherapists in stroke rehabilitation and gain an insight about the practice of evidence‑based stroke rehabilitation.

A questionnaire consisting of 35 questions was developed through a series of interactive meetings between the research team and experts in stroke rehabilitation and also from the earlier studies done on the similar issue.[17‑20] A pilot study involves 32 therapists to get feedback to identify ambiguities and difficult questions, time taken by each question, and re‑scaling of questions. The results obtained from the study allowed minor modification of the questionnaire. The ethical clearance was obtained from Ethical Committee in College of Applied Medical Sciences. The study commenced from May 2017 and completed in October 2017.

First nine out of 35 questions were related to therapist’s background and treatment approach, which included education, approach learned in college, practiced in stroke rehabilitation, and specifics about their clinical practice. Proceeding 24 questions were categorized into aim of the treatment, approach toward tone, movement facilitation and functional activity, and motor control; remaining two questions were open‑ended questions related to process of EBP [Appendix 1]. Questionnaire contained the statements related to various physical therapy approaches; for instance, a question stated as, “inhibition of spasticity does not necessarily result in movement; movements needs to be facilitated” represented the motor relearning program, while a question asking about proximal stability is a prerequisite of distal selective movement is one of the principles followed in Bobath Approach. Each question was written in a manner to describe one technique associated with one specific neurological approach. The survey did not disclose the associated of each question with neurological approach. Responses were recorded on a five‑point Likert scale defined as strongly agree, agree, unsure, disagree, and strongly disagree. Final draft of the survey had been reviewed by unaffiliated experts in the field of stroke rehabilitation. The survey was piloted with several clinicians in the field to receive feedback on the clarity of the questions and the complexity of the survey. The detailed process of development of EBP questionnaire is depicted Figure 1.

Figure 1: Development of an evidence-based questionnaire in stroke rehabilitation 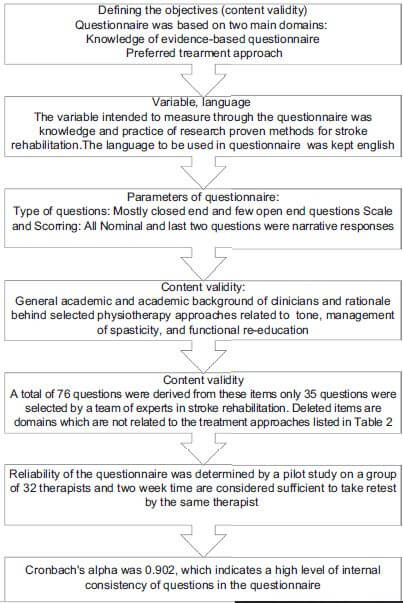 Questionnaire along with consent form was distributed to all 36 hospitals in Province Riyadh. Hospital authority were contacted telephonically about the purpose of the survey. Contact information about the hospitals were obtained from the website of Ministry of Health, kingdom of Saudi Arabia.[21] Therapists (186) involved in stroke rehabilitation from these hospitals and rehabilitation centers received a cover letter, explaining the purpose of the survey, a confidentiality statement, and a link to the survey through e‑mail. EBP questionnaire hosted on‑line through Google survey was mailed to 186 participants. Most of the responses were obtained within 2 weeks and nonresponding participants were reminded through mail every week. On an average, most of the responses were obtained in 6–8 weeks. Seventeen did not respond due to reasons unknown and four had no experience in stroke rehabilitation. The data were obtained from 156 participants (response rate of 86%).

SPSS Inc. Released 2007. SPSS for Windows, Version 16.0. (Chicago, USA, SPSS Inc.) was used to analyze data obtained from questionnaire. Data from the demographic profile were analyzed using frequency and descriptive statistics to capture the characteristics of the sample. Data related to experience, year of graduation, level of education, and practice setting were used to examine potential discrepancies in the professionals’ approaches. Nonparametric tests such as Kendall’s tau beta and Spearman’s rho were used to determine the bivariate correlation between these variables.

The majority of participants were men (n = 124, 79.4%) and most of them were in the age range of 30–39 years (n = 104, 66.7%). The majority reported that their physical therapy qualification was baccalaureate (n = 89, 57.1%). The participant’s graduation year ranged from 1990 to 2016 (i.e., graduation year corresponds to reception of highest degree). Average clinical experience of the respondents was about 4.5 years and 7.6% had about 13–20 years of experience in rehabilitating stroke patients shown in Table 1.

Questions in the questionnaire about the treatment approach they had learned during their academic years and the one they practiced on their stroke patients are shown in Table 2. Bobath/neurodevelopmental techniques (NDTs) were most popular among therapists. Majority of the therapist used Bobath approach/NDT approach (P > 0.001) and least practiced was robotic therapy and transcranial brain stimulation.

Table 3 depicts Ninety‑nine percent agreed that the goal of the treatment is to normalize movement pattern and facilitate postural reactions, whereas only 76% agreed on relying on adaptive and compensatory strategy to attain functional independence. Almost everyone 99% agreed that the movement is only possible after normalization of tone, only 56% agreed that performance of functional tasks will normalize tone, and 24% disagreed with the statement about inhibition of spasticity will not improve functional outcome.

Table 3: Responses from therapists (n=156) related to the goal of the treatment and tone of the muscle

Of 156 therapists, 66.5% received formal training in Bobath/NDT and 77% reported to use this method in their clinical practice. Bobath concept or NDT is a widely used technique in stroke rehabilitation. Former researches reveal no evidence validating the effectiveness of NDT or supporting NDT as the choice of treatment over the newer techniques.[22] Recent systematic review[23] reveals that Bobath approach lacks in sufficient evidence of effectiveness. Further studies are imperative to establish outcome measures regarding objectives of the Bobath concept, such as character of motor performance, decide which subject benefits from NDT and which does not, and reasoning out its implications and contraindications and to ascertain the efficiency of NDT in the treatment of poststroke hemiplegia.[24]

Our survey showed that 99% of clinicians agreed to emphasize re‑educating normal movement and facilitate adaptation to function which represented newer research‑proven approaches. This implies that therapist used mixed or eclectic approach rather than following one approach strictly. Pollock et al.[25] also concluded that currently, no evidence strongly implies that one physiotherapy approach is superior in facilitating recovery of disability than other. A fusion of components from different approaches, an eclectic approach, appears to be more effective than no treatment or placebo control in restoring functional independence following stroke. Physiotherapists should therefore be encouraged to find ways of integrating these findings into their daily practice.

25.1% of therapist learned constraint‑induced movement therapy (CIMT) in their college, but only 2.5% of 156 used CIMT. However, CIMT is a proven and effective method of upper limb stroke rehabilitation.[26] Authentic design of CIMT contains three parts; first, thorough, graded practice of the paretic upper limb to increase task‑specific use of the involved extremity for up to 6 h a day for 2 weeks, whereby subjects performs tasks that continuously increase in difficulty; second, constraint therapy, with the nonparetic upper limb enclosed in a glove (mitt) to encourage the practice of the impaired limb during 90% of the entire awaking hours; and last, behavioral modification to transfer the improvement gained in the clinical transfer’s into real‑world environment. CIMT is a potent, clinically relevant approach, which requires minimal training to implement.

Other strategies to address the hemi‑paretic upper extremity (UE) poststroke consist of a multidisciplinary approach focusing on impairment‑oriented exercise training,[25] functional electrical stimulation,[27] robotic‑aided rehabilitation,[28] bilateral arm training,[29] CIMT,[26] and biofeedback.[30] Our study revealed a considerable low percentage of therapist practiced these methods due to various reasons such as cost and time. On the contrary, mirror therapy (MT) and mental imagery, which are relatively simple and inexpensive, were also practiced by very small percentage of therapists due to lack of training. In MT,[31] a mirror is fixed in the subject’s midsagittal plane, thus mirroring movements of the nonparetic hand as if it were the involved side. The key premise for these therapy strategies is that repeated task‑based practice involving the affected UE improves motor activity, which favors the brain to restore the neural circuitry that regulates voluntary movement.

Most of the therapists in our survey had more than 6.5 years of experience in rehabilitating stroke patients. Almost all the participants received Brunnstrom/proprioceptive neuromuscular facilitation and Bobath/NDT training during their academic years and they had been practicing the same although these approaches lack scientific evidence.[23,25,32] Therapist relied on individual preference to derive the most effective treatment strategy for their clients.

Generalizability of the results is limited to physiotherapists working in Riyadh Province and other provinces with similar health‑care delivery system. Limited number of sample size (n = 156) cannot represent the practice across the whole Kingdom of Saudi Arabia.

Most of the questions and statements in the questionnaire comprise close‑ended answers, which limit the response. We believe the therapist working in a stroke rehabilitation unit, perception of practice, and what he or she actual practice is different.

Questionnaire must also contain responses related to functional outcomes and use of aquatic therapy and bio‑feed back in stroke rehabilitation. Therefore, there is a need of a questionnaire which will help obtain open‑ended response from the respondents allowing more liberal response.