Cyberpsychology is a new field within applied psychology, it assesses how we interact with others using technology and how technology influences our daily behaviour. In today’s world of hi-tech gadgets and radical changes in consumerism, it’s extremely difficult to live one’s life without some application of the Internet. In my own work as a Psychological Practitioner and Social Media Psychologist, I regularly meet people who have some form of depression, social anxiety, insomnia, and major clinical issues with attachment to their smartphones or to a lesser extent, tablets, and laptops.

Several peer-reviewed journals now discuss their research findings on the health problems caused by the new cybertechnologies. In some areas, we have a developing field of clinical Cyberpsychology, which focuses on areas such as clinical Cyberdepression and how we identify the causes for it including Cyberchondria, in which patients browse online for medical information to self-diagnose medical issues. 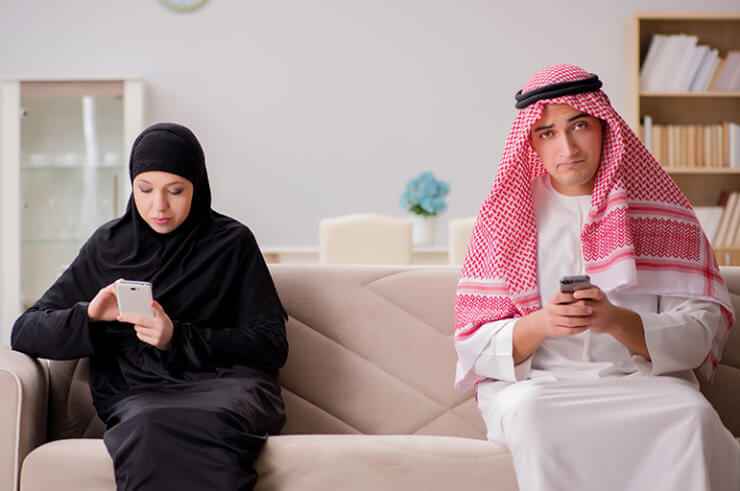 In relation to adults, I see clients who undertake compulsive website browsing and it has become out of control. Many of these behaviour’s lie within the latest developing field of Cyberpsychology.

Academic researchers Mark Siggins and his colleague Cliona Flood have explored mobile phone separation and anxiety and its effects on human performance. Their focus was on the perceived anxiety associated with the separation in their research sample of 18–40-year-olds. Their separation anxiety was measured using the Cellular Technologies Addiction Scale and anxiety scores also measured using the State-Trait Anxiety Inventory. Participants were separated from their mobile phones for a twelve hour period during which their anxiety levels were recorded and compared to a control group. This and similar experiments including research by Katz (2006) that participants were unable to be separated from their phones for even three or four hours.

Contemporary researchers in Cyberpsychology find that most participants were unwilling to take part in a Cyberpsychology experiment if it meant they had to be separated from their phones for more than one hour.

What does this tell us about the nature of attachment and bonding we see as infants in our mothers’ arms and later in terms of social and moral development? We are born to affiliate utilising all of the human cognitive functions of impression management, being well groomed and elegant in meeting others socially. Our human behaviours depend on the reactions we receive from others and our non-verbal behaviours also communicate signals radically different from those unseen online. Monotony boredom and social anxiety are salient factors I see in those who come with problems to be sorted.

The constant exposure to social media for the purposes of our professional work may contribute significantly to and influence our after work experience. We create our own alienation from the self and personal identity. The attachment becomes a virtual 24-hour day by day activity. The most profound effect of smartphone attachment are:

Over the years, I have witnessed an ever-growing epidemic of PC and smartphone addiction. For example, recently, as I was sitting in a coffee house, I observed a group of young teenagers and young adults who were so absorbed in their smartphones, they allowed their coffees to go cold. Although they were at the coffee house as a group, they were completely oblivious to anything going on around them and seemingly devoid of any meaningful conversation beyond a stream of guttural phrases and cliches.

Globally, Internet addiction is on the increase. In 2014 a study by Cecelia Cheng and Angel Yee-lam Li from the University of Hong Kong and published in ‘Cyberpsychology, Behavior, and Social Networking’, stated that 6 percent of the world’s population suffers from Internet addiction,1 that is over 400 million people.

Internet use and addiction in the Middle East

In their study, Cheng and Yee-lam Li examined 164 previous Internet addiction studies, which incorporated data from 89,000 individuals who lived in 31 different countries from around the world. Through examining these studies, they discovered that Internet addiction peaked in the Middle East at 10.9 percent.1

“Internet addiction peaked in the Middle East at 10.9 percent”

A recent study conducted by Compare the Market2 also highlighted a high-prevalence of Internet use in the Middle East. The UAE, Bahrain, and Saudi Arabia all ranked high in terms of the percentage of the population using the Internet and mobile cellular subscriptions. (Diagram 1 and Table 1) 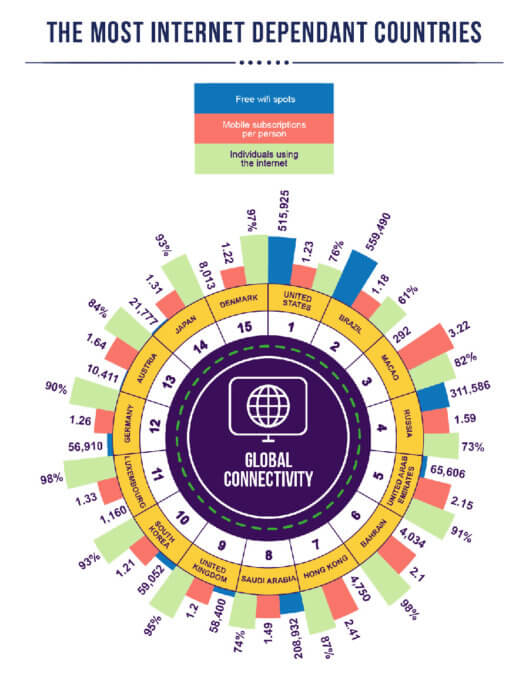 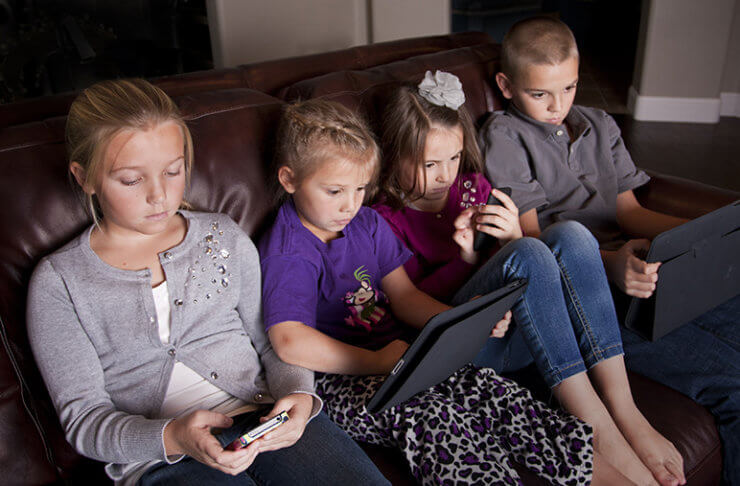 Each day in my suicide and self-harm prevention clinic, I have noticed a slow-rise in the number of children presenting with various forms of attachment to gaming devices inspired by sports adverts and the lure of excitement and the quick fix. There is something about winning that attracts the child, which is manipulation by the manufacturer’s who know the addictive nature of their Apps and video games.

It shows a lack of moral reasoning in the manufacturers own mindset that they develop these video games to exploit children’s young minds and it’s a covert form of deliberate abuse of a child’s psychological development. They wield great power over us aiding and abetting the addiction. Smartphone and video games become idols to be worshipped and adorned. Our lives immediately become capturable and shareable. Not surprised that the editors of TIME  American magazine named the iPhone the single most influential gadget of all time. They also claimed that our use of these gadgets will have serious repercussions for decades to come. What is the price of all this digital magic on the personal psychological development of our youth?

The WHO World Health Organization has classified video gaming as a medical disorder amid increasing evidence of young people suffering from psychological distress and family breakdown through their addiction.

The UK’s first Centre for Internet Addiction has been opened by the North West London NHS Foundation. I commend the Consultant Psychiatrist Henrietta Bowden-Jones who has pioneered the foundation of this clinic in London. She told the Guardian Newspaper, that “Gaming disorder is finally getting the attention it deserves. The distress and harm it can cause is extreme and I feel a moral duty on behalf of the NHS to provide the evidence-based treatment these young people and their families need,”  she added that “other countries have free services, for example, there are some in Asia. We are really behind. I am not sure how it took us so long. Maybe its because we had no champion and I will identify as that champion.”

In my own charity clinic, I notice that in some cases children as young as six to ten years old are socially learning gaming from parents. Children frequently tell me about how they must have popular video games otherwise they will be bullied if they don’t have it or understand it. Pressure on parents to either give in to youngsters or exert discipline and prohibit its purchase or use.

Gaming Disorder is to be added to the ICD -11 a classification system used by psychologists and psychiatrists to diagnose mental health disorders. The specific criteria if seen evident in an individual will make it easier for clinicians to diagnose and appropriately treat the condition. We need research funding to explore the causes of gaming addiction and Smartphone addiction. Press reports confirm that Dr Vladimir Poznyak of the WHO said up to six percent of young people could be affected.

In 2018, Dr Jo Begent wrote an excellent article in the Telegraph newspaper where she outlined many of the complexities in her experiences of dealing with children who were addicted to gaming. She cites the case of a ten-year-old who had bladder and distended bowel problems were it had ballooned out of his pelvis. A thirteen-year-old also given to gaming disorder had heart palpitations every time he stood up, as he was unused to moving about normally. In another case, a fourteen-year-old suffers from a Vitamin D deficiency as she rarely saw the sun. Most of these symptoms I see in my own clinic where some kids will self-harm if removed from video games. The emotional release is experienced by wrist stomach or arm and thigh cutting. Dr Begent sees the worst of these cases as an adolescent physician. She said that there is a grade of physical damage being done to our children due to the Internet. This is an unusual phenomenon in our health service. It’s unusual because of the speed of hi-technological developments.

“As doctors, we have to treat the physical and emotional symptoms of what has become a major health concern.” Dr Begent

As a psychologist I see kids unable to communicate their feelings to me, parents tell me about their children falling asleep in school, unable to focus or concentrate on homework. Parents frequently see anger in their children if prevented from playing video games on the Internet and mild to severe outbursts of aggression if disciplined. Many parents are to be commended for taking Internet behaviour of their children seriously and teaching them basic skills of rewarding avoidance skills with appropriate rewards. It’s far too simple to take it away as technology is interwoven into their lives for educational achievement.