The thalassemia syndromes are genetic disorders characterized by absent or deficient synthesis of one or more of the normal globin chains. Absent globin synthesis is designated with a (°) superscript, e.g. β°-thalassemia, while the presence of some (but not enough) of the gene product is noted by a “+” superscript, e. g. β+-thalassemia.

When there is a partial synthesis of the affected globin chain, it is usually structurally normal, therefore, the defect is a quantitative one secondary to unbalanced globin synthesis. This contrasts with the hemoglobinopathies in which the variant haemoglobins are qualitatively or structurally abnormal.

The thalassemias are a heterogeneous group of disorders and are classified according to the particular globin chain or chains synthesized in reduced amounts, i.e. alpha, beta, or delta-beta thalassemia.

The pathophysiology is similar in all forms of thalassemia. An imbalance of globin chain production results in the accumulation of free globin chains in the red blood cell precursors. These are very insoluble and precipitate, resulting in the hemolysis of RBCs, i.e. Hemolytic anaemia, with consequent compensatory hyperplasia of the bone marrow.

The thalassemia syndromes provide examples of defects at essentially all different steps of globin synthesis.

i) Deletion of the DNA sequences coding for the structural gene.
ii) Point mutations in the β-globin gene.
iii) Most deletions in β-globin cluster affect more than the β-globin gene, e.g. δβ-thalassemia, HPFH, and Hb-Lepore.

Alpha thalassemia is due to an under-production of alpha chains. It occurs most commonly in persons from South-East Asia.

α-thalassemia genes affect synthesis of α-chains which are essential for embryonic, fetal and adult Hbs. Deficiency of α-chains causes excess of β, γ, δ chains in the fetal and neonatal Periods which cause the formation of Hb-Barts (γ4) and later of Hb-H (β4).

Four clinical types are seen, depending upon the number of α-genes affected:

• Genotype (–/–) with deletion of 4 α-genes. Both parents are α-thal1 (heterozygote) trait.
• Clinical and Hb-findings: Over 80% of the haemoglobin is Hb-Barts (γ4 tetramer), which has a very high O2  affinity (causing severe tissue hypoxia) and precipitate causing an inclusion body hemolytic anaemia cause severe in utero anaemia leads to hydrops fetalis.

• Genotype (–/α-) with deletion of 3 α-genes. One parent is α-thal1 trait and the other is α-tl2 trait.
• Clinical and Hb-findings: Hb-H (β4 tetramer) has a very high oxygen affinity and precipitate causing an inclusion body hemolytic anaemia which called Cooley’s anaemia.

>Less than 150 mutations which can produce β-thalassemia 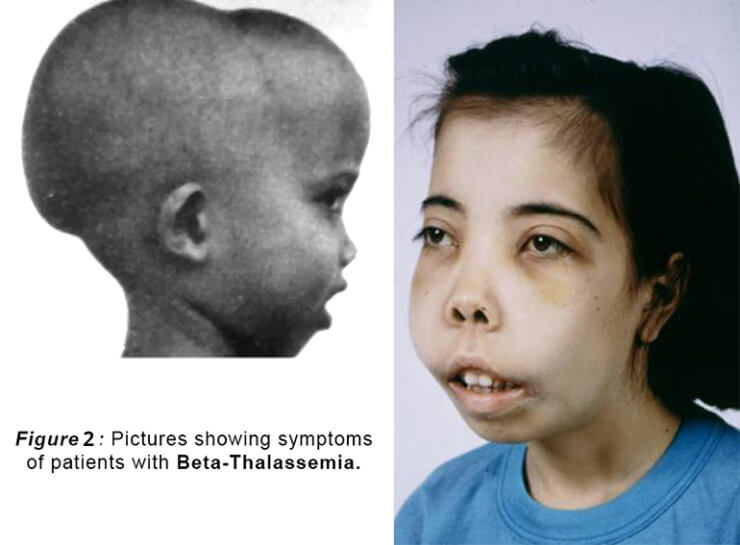 Beta thalassemia is due to underproduction of the -chain of Hb. In thalassemia major, or Cooley’s anaemia as it was known, the child usually presents by 6-mnths of age with severe transfusion-dependent anaemia. Unless the child is adequately transfused, compensatory expansion of the bone marrow results in an unusually-shaped face and skull. (Figure 2)

Mutational basis: There are 4 main functional types of mutations:

• Mutations in cap sile (5′) and polyadenylation site (3′) of mRNA cause abnormal transportation of mRNA to the cytoplasm with consequently reduced levels of translation.
• Results in β+ thalassemia.

B. Consensus sequences:- (adjacent bases) around splice junction decrease the ability of this RNA to splice correctly but still result in the detectable amount of normal β-globin leading to β+ thalassemia e.g. Intron 1-nucleotide 6 (β+IVSI-6)

• Chain termination mutations lead to shortened β-globin mRNA, which is often unstable and rapidly degraded. This leads to reduced levels of translation of an abnormal β-globin leading to β° thalassemia (Figure 3).

Chain termination mutations may be:

A. Frame-shift mutations: deletion or additions of 1,2 or 4 nucleotides which change the ribosome rending frame and cause premature termination of translation of β-globin mRNA e.g. deletion of 1 base at position 6 (β°6-4bp).

I. PCR: direct detection of mutations:

III. Most deletions in β-globin cluster affect more than the β-globin gene (as in δβ-thalassemia, HPFH, and Hb-Lepore)

1. Deletion type: due to deletions of the delta and beta globin genes.

2. Non-deletion type: due to point mutations in the promoter region of either Gγ or Aγ globin genes which is involved in the control of expression of the haemoglobin genes.

– Clinically: persons with HPFH continue to produce significant amounts of fetal Hb after birth. This is not associated with any medical problems.