Gastric antral vascular ectasia (GAVE), also referred to as “watermelon stomach,” is an uncommon, under-reported, yet significant cause of acute or chronic gastrointestinal blood loss in the elderly. It accounts for about 4% of the nonvariceal upper GI bleeds, and diagnosis is established by the demonstration of characteristic watermelon stripes on upper GI endoscopy. The exact cause is unknown but is often associated with many systemic conditions and characterized by chronic anemia. With this case, we wish to emphasize the need to do upper GI endoscopy in all elderly patients undergoing anemia evaluation and to consider this possibility even in the very elderly individuals.

Gastric antral vascular ectasia (GAVE), also referred to as “watermelon stomach,” is an uncommon, under-reported, yet significant cause of acute or chronic gastrointestinal blood loss in the elderly. It accounts for about 4% of the nonvariceal upper GI bleeds, and diagnosis is established by the demonstration of characteristic watermelon stripes on upper GI endoscopy.

A 65-year-old female with no known comorbid illnesses presented with complaints of generalized fatigue, loss of appetite, and unquantified loss of weight for the last 4 months. She was evaluated locally 2 months ago and was found to be anemic with a hemoglobin of 10 g%. She was started on oral iron supplementation, as her iron stores were found to be low, with no significant symptomatic improvement since then. Over the next 2 months, she had

persistent complaints of generalized edema and occasional bouts of diarrhea. She did not have any associated overt bleeding mani- festations. Routine evaluation revealed iron deficiency anemia, and stool occult blood was positive. This warranted the second line of anemia evaluation. Upper GI endoscopy revealed GAVE (Fig. 1, 2). Argon plasma coagulation was done, and her occult blood loss ceased. On follow-up, her hemoglobin levels gradually improved, and she continued to be asymptomatic, as her earlier symptoms had largely resolved. 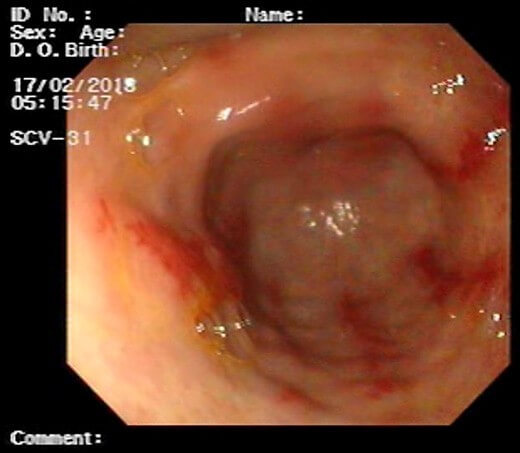 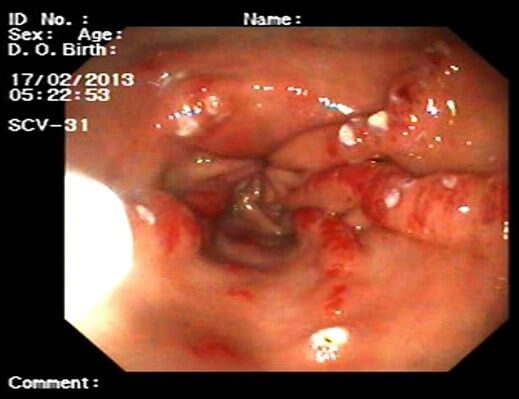 Figure 2: Radial extension of red stripes from the pylorus of the stomach.

GAVE is an uncommon but significant cause of acute or chronic GI blood loss in the elderly. It was first described by Rider as “fiery red changes with marked hypertrophic mucosal changes, and scattered profuse bleeding” in 1954. Seen more commonly in females (5:1), patients may initially present with features suggestive of transfusion-dependent chronic iron deficiency anemia, severe upper GI bleeding, or even gastric outlet obstruction. The condition is often associated with hypertension, diabetes, renal failure, gastric carcinoma, aortic stenosis, and with autoimmune diseases such as Sjogren’s syndrome, systemic lupus erythematosus, primary biliary cirrhosis, and systemic sclerosis. GAVE is characterized by a pathognomonic endoscopic finding of red spots in a stripe pattern extending radially from the pylorus (watermelon stomach), or presents as a diffuse pattern (honeycomb stomach) [1]. Histology, though, is not pathognomonic, and four patterns have been largely described: vascular ectasia of mucosal capillaries, spindle-cell proliferation, focal thrombosis, and fibrohyalinosis.

The main differential diagnosis is portal hypertensive gastropathy and may even be co-existent. Portal hypertensive gastropathy primarily involves the fundus and corpus of the stomach though, and the histological pattern is different. It is important to differentiate between the two because of the diametrically opposite therapeutic approach to either of them. Endoscopically, PHG shows a combination of mosaic-like pattern, red point lesions, cherry-red spots and black-brown spots, and often responds to beta blockers, transjugular intrahepatic porto- systemic shunt, and portocaval shunts. This response is characteristically absent with GAVE.

Pathogenesis is largely nondescriptive, and various hypotheses have been put forward. Mechanical stress due to strong gastric peristalsis induces prolapse and trauma of the antral mucosa and intermittent obstruction of blood vessels, which leads to fibromuscular hyperplasia and vascular ectasia. Certain authors attribute this to spindle cell proliferation due to humoral factors such as gastrin, vasoactive peptide, 5-HT, glucagon, catecholamines, prostanoid, and other undefined vasoactive substances resulting in increased venous hydrostatic pressure or due to vasodilation secondary to high levels of such vasoactive substances due to local proliferation of neuroendocrine cells [3].

Two main forms have been described in the literature:

Treatment for GAVE is basically divided into three broad categories – pharmacologic, endoluminal, and surgical. Though avoidance of agents that cause mucosal bleeding and irritation such as NSAIDs, aspirin, and clopidogrel are important, options such as corticosteroids, estrogen-progesterone combinations, tranexamic acid, thalidomide, alpha-interferon, calcitonin, and cyproheptadine have been explored, but with limited efficacy [5, 6].

Endoluminal therapies are the mainstay of conservative treatment and include options such as endoscopic band ligation, sclerotherapy, heater probe, and argon plasma coagulation, which is the preferred endoscopic treatment and is reported as safe. Neodymium-yttrium-aluminium garnet (Nd: YAG) laser coagulation has been successful to control GAVE-related bleeding.

The most serious complication following laser therapy is gastric perforation. Another observed complication is pyloric stenosis that can induce either delayed gastric emptying or true obstruction [7, 8]. A major disadvantage of laser endoscopic therapy is its high cost, and the risk of complication dependent on the endoscopist’s skills. Argon plasma coagulation (APC) is a non-contact technique with a controllable depth of coagulation. In comparison to Nd: YAG laser therapy, APC is easier to use, manageable, cheaper and, most importantly, safe [1]. Primary surgical treatment is not advocated because of the reported high morbidity and mortality of patients with GAVE syndrome undergoing surgery who often have multiple other medical comorbidities.