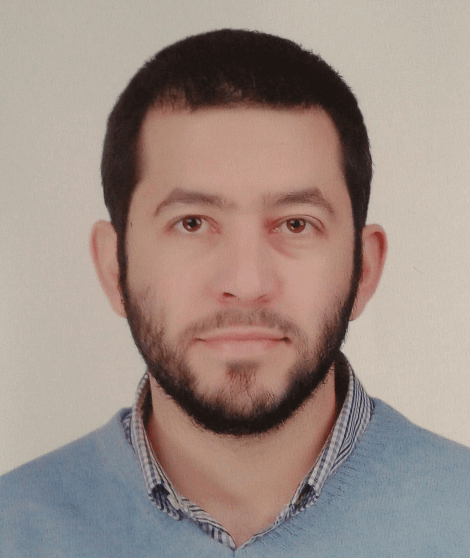 Following the acute ischemia caused by occlusion of a coronary artery in the setting of STEMI, myocardial necrosis ensues within few hours.[1] Rapid reestablishment of coronary flow can enhance ventricular function and lessen mortality.[2] Primary percutaneous coronary intervention (PCI) is the proved method of reperfusion all  around the world.[3] It has enhanced the survival in STEMI patients compared with thrombolytic therapy by restoring greater proportions of antegrade coronary flow and evading intracranial hemorrhage.[4]

Despite the progress in the angioplasty & stenting procedures, initial PCI was still associated with a percentage of suboptimal coronary TIMI flow.[5,6] Some patients still have an impairment of myocardial reperfusion despite opening of the culprit vessel with a subsequent negative effect on the clinical outcome reversing the potential benefits of primary PCI, [7, 8] in addition to delayed recovery of ventricular function after an acute myocardial infarction.[9] Factors that affect the recovery of ventricular function are the size of the infarction, the flow in the infarction related artery, asynergy and elevated wall stress.[10] Prevention, anticipation, immediate detection and treatment of no reflow may alter the outcome of PCI.

We aimed to find the association of initial infarction related artery patency upon diagnostic angiography with the immediate PCI outcome and the incidence of later major adverse cardiac events.

We performed a single-centre, observational prospective study of 46 acute STEMI patients whom were planned for mechanical reperfusion by primary angioplasty.

Patients were included; regardless of having a previous MI or not; when they presented in the time frame within 12 hours from symptom-onset. The institutional ethics committee accepted the study protocol. All patients provided a written informed consent. Patients who had already received a thrombolytic drug, presented late after 12 hours of symptom-onset, developed cardiogenic shock or required vasopressors or IABP prior to intervention were excluded.

Patients were exposed to full history taking, complete general and local examination, 12 lead surface ECG. After receiving loading dose of Aspirin and  Clopidogrel, coronary angiogram was performed. Angiographic data were obtained to enable identification of the culprit lesion. Infarction related artery patency was classified in relation to TIMI flow grade.[11] Upon angioplasty, thrombus aspiration device was used if needed. Whenever possible direct stenting was the main modality. Intracoronary nitroglycerine was injected before and after stenting. Control angiogram was done after stenting to evaluate post PCI TIMI flow and potential complications. When the use of GP IIb/IIIa inhibitors was imminent, it was infused down-stream in the Cath Lab. Post PCI result was assessed by two independent operators for the presence of residual thrombi, incidence of slow flow/no reflow and grading final TIMI flow. Patients were followed over a period of three months afterwards through phone calls followed by outpatient clinic visits to detect the incidence major adverse events that included stent thrombosis, re-infarction, acute decompensated heart failure necessitating readmission and mortality.

Our study included 46 patients. Mean age of the study population was 53.34±9.6 years. Male patients represented 87%. Risk factors distribution was 56.5% for smoking, 43.5% for diabetes, 45.7% for systemic hypertension and 10.9% of the cases had a previous history of ischemic heart disease (Table 1).

Upon initial angiography, 41.3% of patients showed single vessel disease. Infarct related artery was LAD in 54.3% of the cases while it was RCA in 34.8% and LCX in the remaining 10.9%. According to the initial culprit coronary patency, 58.7% of patients showed TIMI flow grade 0, while 41.3% had varying degree of TIMI ≥ 1 flow. During the interventional procedure, thrombus aspiration was used in 19.6% of the cases, and direct stent deployment was done for 43.6% of the cases. Regarding the procedural outcome, 32.6% of the cases developed slow flow/ no-reflow and residual intra-coronary thrombus was seen in 23.9%. 28.3% of the cases received an IV infusion of IIb/IIIa inhibitors (Table 1). 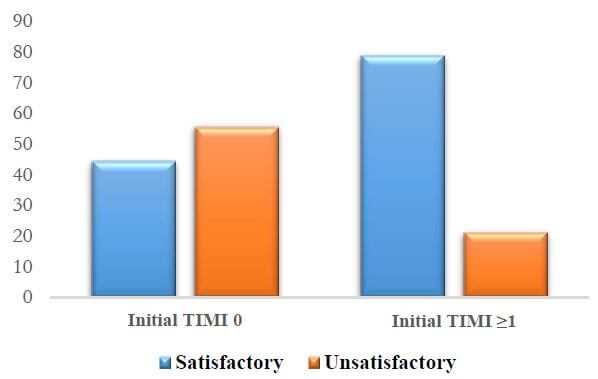 During the follow up period over the following three months post intervention, the incidence of stent thrombosis and re-infarction were reported in 4.3% of the cases, 21.7% of the patients developed acute decompensated heart failure that necessitated readmission and 6.5% of them died. Overall, major adverse cardiac events (MACE) had occurred in 47.8% of the study population (Table 1).

When correlating risk profile and angiographic data with the incidence of MACE (Table 3), we found that two factors showed a significant association with the incidence of adverse events; LAD as a culprit artery in those with anterior wall infarction (p=0.011) (Figure 2), and initial TIMI 0 flow of the infract related artery (p=0.002). (Figure 3). 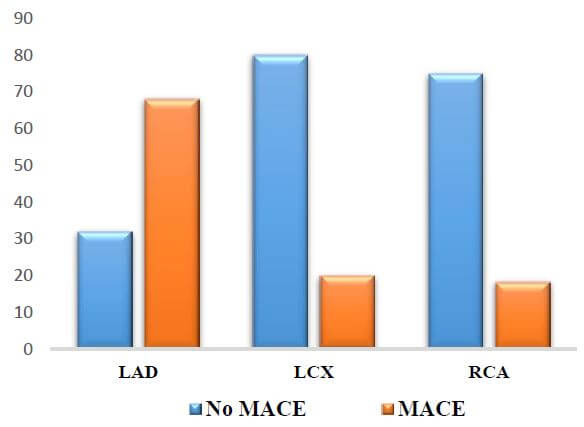 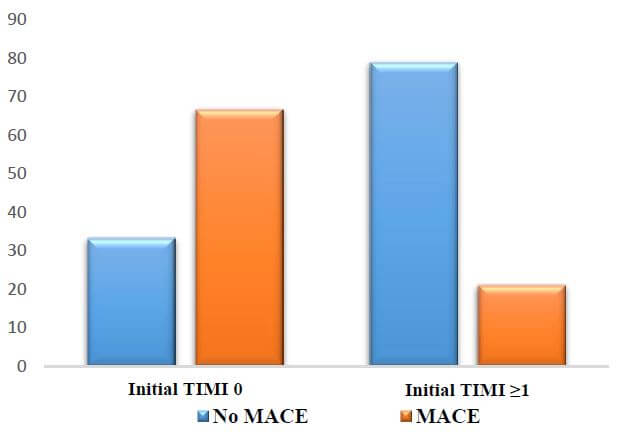 Main findings from our study are: (1) Initial coronary patency before primary PCI with baseline TIMI flow grade ≥1 is significantly associated with immediate satisfactory PCI result by achieving more post PCI TIMI grade 3 flow with less incidence of slow flow/no-reflow or residual thrombi. (2) When the LAD is a culprit in patients with anterior wall infarction, it had a significant association with the incidence of main adverse events. (3) Poor initial coronary patency is significantly associated with the incidence of later MACE including stent thrombosis, re-infarction, readmission with acute decompensated heart failure and death.

The findings of the current study regarding the impact of initial coronary patency on the PCI outcome is in agreement with previous reports, which aimed to find the angiographic features that predict poor post PCI TIMI flow. A sum of 891 patients treated by primary PCI for acute MI were included in two large randomized trials; GUSTO IIb and RAPPORT. It was found that patients with totally occluded culprit coronary artery at presentation tended to have poor final TIMI flow compared with those with non-totally occluded vessels (p=0.09).[12] Another study enrolled 382 patients with acute MI who underwent primary PCI to identify angiographic findings that predict no-reflow. Univariate analysis showed that TIMI flow grade ≤1 prior to PCI, was linked to no-reflow (p<0.05). Multiple logistic regression analysis identified low baseline TIMI flow on angiography as an independent predictor of no-reflow (p=0.0002).[13] This was confirmed later on by an analysis of the results of the HORIZONS-AMI trial regarding the total number of 3,845 treated coronary lesions among 3,362 vessels. It was found that baseline TIMI flow ≤1 grade was one of the independent predictors of impaired coronary flow after PCI (p<0.0001). It was concluded that baseline TIMI ≤1 flow was a dominant predictor of suboptimal final TIMI flow.[14] Recently; a randomized trial included 321 patients presenting with STEMI treated by primary PCI. A post-hoc analysis was done to explore the outcome of initial TIMI flow. Final TIMI grade 3 flow was less observed in patients with initial TIMI 0/1 flow (p=0.009). Stent thrombosis was higher in patients who presented with initial TIMI 0/1 flow (p=0.048).[15]

Our data about the culprit vessel association with the incidence of adverse events went in line with prior findings of the studies that was designed to assess the impact of the location of the culprit lesion on the outcome. A study included 500 patients who were treated by primary PCI for acute MI to define variations in clinical and angiographic data. Patients in whom the LAD coronary artery was the infarct-related artery showed significantly higher overall mortality during index hospitalization (p<0.0001).[16] This went in line with a study that reviewed 553 STEMI patients who were treated by primary PCI to clarify the angiographic predictors for reduced LVEF. When LAD was identified as the infarction related artery, patients had lower LVEF (p<0.01) and higher incidence of reduced LVEF (p< 0.01). Multivariate analysis established that LAD was the chief determinant of reduced EF after STEMI.[17] Recently; the Polish Registry of Acute Coronary Syndromes analyzed the data of 4581 patients with STEMI who underwent PCI, to evaluate the impact of infarct related artery occlusion on the outcome. Patients were grouped in relation to the culprit artery, and then each group was subdivided according to its initial patency. Totally occluded culprit at baseline angiogram was associated with higher in-hospital (p=0.0001), 6-month (p=0.0001) and one-year (p=0.001) mortality in comparison with those with patent culprit vessel only when the LAD was the culprit.[18]

The findings of our study concerning the impact of initial coronary patency on the later adverse events are in agreement with previous studies that was intended to assess the outcome of poor initial TIMI flow and the impact of pre-procedural flow on mortality. In a study enrolling 1,791 patients with myocardial infarction treated by primary angioplasty., initial TIMI flow was related to enzymatic infarct size (p<0.001), pre- discharge ejection fraction (p<0.001), and one-year mortality (p<0.05). Multivariate analysis revealed that initial TIMI 3 flow grade is an independent predictor of one-year survival (p<0.05).[19] Discordant data was reached by a prospective registry that  included 10,455 patients to evaluate the relationship between baseline epicardial TIMI flow grade and mortality in patients treated with PCI. Of this population, 2,853 were presenting with STEMI. Baseline TIMI flow grade was not an independent associate of either 30-day (p=0.15) or 1-year mortality (p=0.20).[20] However, as the HORIZONS- AMI trial included 3,602 patients, 3,093 of them underwent primary PCI. Early culprit vessel patency was related to lower mortality at one year (p=0.04), definite or probable stent thrombosis (p=0.002) and total adverse clinical events (p=0.07). In multivariable analysis, early patency of the culprit coronary at baseline angiography was an independent predictor of lesser mortality at one year (p=0.02).[21] This was confirmed by a study that was conducted on 135 STEMI patients treated by primary angioplasty who presented later on with definite angiographic stent thrombosis. The study aimed to characterize the epicardial coronary flow in patients with angiographic prove of stent thrombosis. 90% of the cases showed a poor initial TIMI flow (p<0.01). Patients with reduced baseline TIMI flow had less incidence of post- procedure TIMI 3 flow (p=0.1). Patients with baseline TIMI flow <3 tended to have greater infarct size (p=0.07).[22]

Our study included a small set of patient population and follow up period was relatively short. Larger multicenter cohort studies with longer follow up are justified.

Genetics and Pathophysiology of Maturity-onset Diabetes of the Young (MODY): A Review of Current Trends
Sacubitril/Valsartan in Management of Heart Failure: A Review of Safety, Efficacy and Cost-Effectiveness
Impact of Electronic Cigarette on Public Health
Hospitalization Rates and Characteristics of Patients Hospitalized with Laboratory-Confirmed Coronavirus Disease 2019
Diabetes and its associated cardiovascular complications in the Arabian Gulf: Challenges and Opportunities
Share your articles so others can learn from you*