Acute appendicitis is the most frequent cause of acute abdominal pain with  a lifetime risk of 7%, representing an important proportion of emergency surgical procedures. In the US, approximately 300 000 people undergo appendectomies annually in acute care hospitals.[1–3] In Qatar, 2 375 cases were reported in public hospitals during 2013.[4]

Currently, the majority of appendectomies are performed using the laparoscopic technique, which has contributed to reduced surgical site infections (SSIs), the length of hospital stay, and cost.[5,6] Nevertheless, SSIs remain a threat, especially for complicated appendicitis (e.g., gangrenous, perforated) and for those performed via open procedures or when disruption of infection control practices was observed. The prevention of SSIs emphasizes the effective use of antimicrobial prophylaxis, and other control practices including non-hair removal at  the operative site (unless  it interferes with the procedure), maintaining normothermia during the perioperative period, surveillance for SSIs (using postdischarge surveillance methods), and the compliance with bundles elements for surgical procedures.[7]

Recently published papers reported the incidence of SSIs as 2.8% in laparoscopic and 4.6% in open appendectomies in Korea,[8] and 7.2%, 6.2%, and 5.9% in Brazil,[9] China,[10] and Sweden,[11] respectively. Lower infection rates are reported by the US Center for Disease Control and Prevention National Healthcare Safety Network (CDC/ NHSN) and the International Nosocomial Infection Control Consortium (INICC) (1.4% and 2.9%, respectively).[12,13] There are no published reports about the incidence of SSIs in healthcare facilities in Qatar. The public health system in Qatar has four general hospitals where appendectomies are performed. These facilities provide care to the population regardless of their nationality, the majority of patients being foreign workers, mainly single males aged between 20–50 years old from South East Asian countries (e.g., India, Nepal, Sri Lanka, and Bangladesh).[14]

This study was conducted with the objective of describing the incidence of SSIs in appendectomies performed during a three-year period in a community hospital in Qatar, and comparing this with external benchmarks from the CDC/NHSN and INICC.

A longitudinal study was carried out at The Cuban Hospital, Qatar, from January 2013 to December 2015. The Cuban Hospital is a 75-bed community hospital providing healthcare services for patients from neighboring communities or transfers from other facilities. All patients diagnosed with acute appendicitis and who underwent appendectomy were included in the study. For  the diagnosis of appendicitis the clinical picture, laboratory and radiological findings suggestive of acute inflammation of the appendix were considered.

The standardized surveillance criteria for defining SSI developed by the CDC were used.[15] The American Society of Anesthesiologists (ASA) score was used to measure the patient´s physical status. Operative procedures were classified according to the degree of contamination into three classes (clean-contaminated, contaminated, or dirty/infected). For each patient, the National Nosocomial Infection Surveillance (NNIS) system risk index was computed on the basis of an ASA score higher than two, a wound class of contaminated or dirty/infected, and the duration of procedure > 81 minutes, with each criterion met adding one point to the index.

The surveillance procedure included the diagnosis of SSI within 30 days of surgery, whether during hospitalization or after discharge. A combination of postdischarge surveillance methods was used and included a review of the patient’s file or electronic medical record and a telephone interview. The surveillance was conducted by a trained infection control practitioner and data validation performed as per Joint Commission International requirement.[16]

The study was performed using administrative data collected as a component of the surveillance system at the corporate level. The registration of this type of study is not required in Qatar, nor is informed consent from patients. Patient confidentiality was protected by the infection control staff who coded all data.

Statistical analysis was performed using JMP software version 10 (SAS Institute Inc., Cary, NC, 1989–2007). The incidence of SSI was calculated using the NNIS operative procedure categories (United States), by dividing the number of infections by the number of operations performed and multiplying by 100. Comparisons among patients according to the report of SSI were made using the chi-square test with Yates correction or the Fisher’s exact test, as appropriate. Relative risk ratios (RR), 95% confidence intervals (CI), and p-values were determined.

Table 1: Patient and procedure characteristics according to surgical site infection.

Positive laboratory cultures were collected in 20 patients, of which 12 isolates (60.0%) were extended spectrum beta-lactamase producers (ESBL) Escherichiacoli, four were Pseudomonasaeruginosa, and one isolate each were reported as E. coli, Enterococcus faecalis, Klebsiella  pneumoniae  (ESBL)  and  group  B Streptococcus [Figure 1]. Sixty-five percent of the isolates were multidrug-resistant organisms (ESBLs) [Figure 1]. 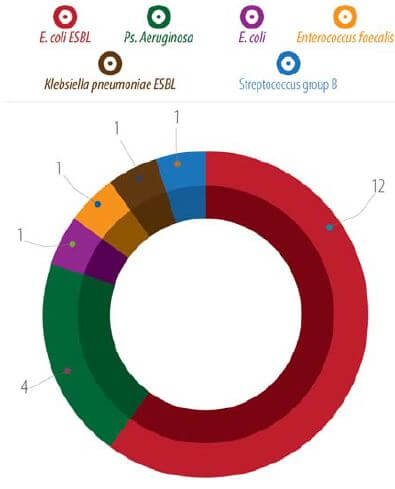 The SSI rate was higher at our hospital than that reported by CDC/NHSN and INICC, which depended mainly on cases with RI [2,3]. The infection rate for cases with a RI 0,1 at our hospital were only slightly higher than the CDC/NHSH. Nevertheless, a significant reduction in the infection rate was observed during the study period, which could be explained by the step-by-step implementation of the infection control program in new healthcare facilities (TCH was opened in 2012). Among the infection control practices implemented, it is important to emphasize the surveillance of SSIs and compliance monitoring with the surgical bundles, which included antibiotic prophylaxis, perioperative glucose control, postoperative normothermia, and hair removal practices.[7] Additional practices included in the facility program are a preoperative shower with chlorhexidine gluconate solution and standardized antibiotic prophylaxis.

Factors related to SSIs in the patient population included smoking, complicated appendectomies (e.g., gangrenous, perforated), and those performed by open procedures. These factors have been mentioned in other published studies.[8–11,17]. An analysis of NHSN data (2006–2008) reported male sex (odds ratio 1.70; 95% CI 1.07–2.68) as a risk factor for SSI in appendectomy, which is not consistent with our findings.[17] This is probably related to the gender distribution in our patients and the population living in the country. The microbial agents isolated are similar to previous reports about the topic. Nevertheless, it is important to consider the high frequency of ESBL producing organisms, mainly E. coli. The current antimicrobial prophylaxis recommended for appendectomy includes the use of beta-lactam antibiotics with or without metronidazole.[18–21] Antimicrobial agents for prophylaxis should be active against the pathogens most likely to contaminate the surgical site, but the patient’s skin and intestinal flora could be colonized by multidrug-resistant organisms before admission, making the current practices ineffective.[22] Additional research is needed to clarify this issue.

The language barrier and the efficiency of post-discharge surveillance could be considered the most important limitations of this study. The population studied included nationals from many countries, which is a common characteristic of the population living in Qatar. This makes data collection during physician’s interview more of a challenge (overcome with the use of translators). Despite the methods used for detection of surgical infections after discharge, it is important to consider that patients with SSIs could visit primary health care facilities, which provide free of charge services. In selected cases, we performed telephone interviews using translators according to the patient’s primary language, mainly when there was any suspicion of SSI from the patient’s file or electronic medical record review. In addition, the number of procedures could limit the power of risk factor analysis, but this did not constitute the main objective of the study. Currently, there is no SSIs benchmark at the national or regional level; this is the reason why the national infection control program uses the US CDC/NHSN data for references of program goals and evaluation of quality improvements.

Our study has demonstrated that the incidence of SSIs at our hospital was slightly better than external benchmarks, with a reduced infection rate over the study period. The data collected could be used as a point of reference for the facility improvement program. It also provides additional information about the incidence of ESBL organisms in the etiology of SSIs that require further research.

Unleashing the immune system’s ‘STING’ against cancer
Fighting cancer with rejection-resistant, ‘off-the-shelf’ therapeutic T cells
A metabolic enzyme as a potential new target for cancer immune therapies
Genetics and Pathophysiology of Maturity-onset Diabetes of the Young (MODY): A Review of Current Trends
Epidemiology of COVID-19 Infection in Oman: Analysis of the First 1304 Cases