Menopause is the permanent cessation of the menstrual cycles following the loss of ovarian reproductive function and is a natural physiological process related to aging. [1] The postmenopausal period is clinically and retrospectively diagnosed with the following amenorrhea for more than 12 months.

There is evidence of a worsening quality of life (QOL) after menopause, especially in relation to the presence of climacteric symptoms, their frequency and intensity. [1] Among the climacteric symptoms that affect QOL are insomnia (INS) and musculoskeletal pain (MSP).

Epidemiological investigations focusing on the postmenopause stage worldwide show an alarming prevalence of MSP [2] and INS, [3] although the different methods used to evaluate INS and the frequent lack of a clinical diagnosis hamper the comparison among the studies. As women age, both sleep disturbances and pain complaints tend to increase.

INS seems to influence the onset and level of MSP in different populations, [4] although most studies focus on both sexes and different age ranges, rather than specifically in postmenopausal women. The co-occurrence of poor sleep quality, pain, and mood symptoms, such as anxiety and depression is evidenced in the literature and presented as a cluster of symptoms in women. [5]  However, there is no evidence in the literature about the association between chronic MSP complaints and INS in postmenopausal women and its characteristics regarding MSP, menopausal and mood symptoms, sleep and and QOL. We also aimed to examine the predictor factors for menopausal symptoms and QOL.

The present study was approved by the Ethics Committee of the Universidade Federal de São Paulo (CEP/UNIFESP #786.299/2014). Recruitment of general women took place between February 2015 and October 2016.

A total of 355 women were assessed for eligibility to take part in the study, with 62 being selected after the evaluation of the inclusion and exclusion criteria (Fig. 1). The inclusion criteria consisted of being women aged 50 to 65 years; present at least 1 year of amenorrhea; follicle-stimulating hormone concentrations ≥30 mIU/mL; undergo a clinical consultation for confirmation of menopause diagnosis; to not have taken hormonal therapy in the previous 6 months; and to not be obese (body mass index [BMI] <30 kg/m2). As exclusion criteria, we considered: high risk for sleep disordered breathing, assessed by the Stop-Bang questionnaire; [6] self-report of uncontrolled clinical; major neurologic, orthopedic and rheumatologic diseases, autoimune disorders or conditions that could influence pain; psychiatric disorders; use of psychoactive drugs such as hypnotic, antidepressants, anxiolytics, benzodiazepines and central nervous system stimulants; attending psychotherapy, physiotherapy or treatments for INS or pain; shift work; illiteracy; and the presence of other sleep disorders diagnosed by polysomnography (PSG) exam (narcolepsy, obstructive sleep apnea evidenced by an apnea-hypopnea index (AHI) ≥15/hr, periodic limb movements (PLM) index ≥15/hr and parasomnias). 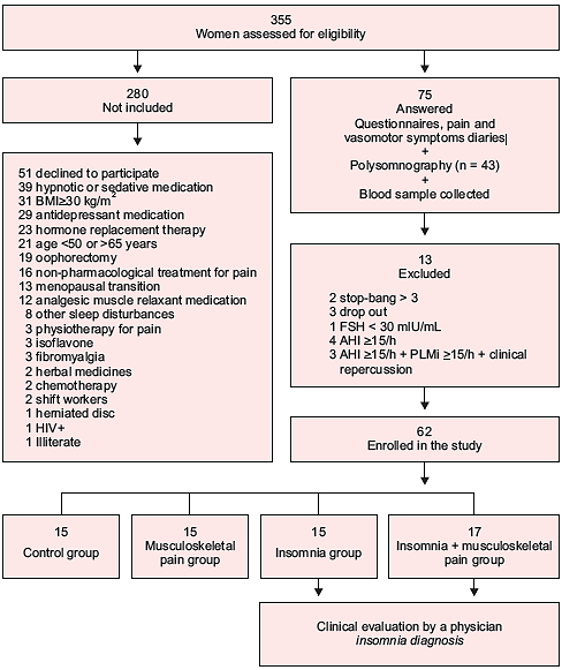 Participants provided sociodemographic data and reported any comorbidities on their first visit. Weight and height were assessed in the first visit, allowing for the calculation of BMI (Kg/m2). All volunteers completed questionnaires upon enrollment. On their second visit, volunteers underwent a laboratory PSG exam on a scheduled night followed by a blood sample collection in the following morning. On the third visit, volunteers with an INS Severity Index ≥157 had a clinical consultation to confirm their INS diagnosis.

The postmenopausal stage was classified according to Stages of Reproductive Aging Workshop (STRAW) criteria into early, which covers the first 8 years since menopause; and late, which covers the subsequent period. [8]

This questionnaire was used to evaluate the severity and interference of MSP. [9] The answers are distributed on a nu- merical scale from 0-10, with 0 representing“does not interfere”and 10 representing“interferes completely”.

Participants completed 3 times a day over 10 days a pain diary, composed of an average pain rating on a VAS (0“no pain”, 10“worst pain imaginable”). [10] VAS scores were averaged across days for each period to assess the intensity of chronic MSP during the day.

Participants reported the number of hot flashes and night sweats before going to bed of the previous night daily during 10 days. The number of vasomotor symptoms was averaged across days.

The World Health Organization QOL Questionnaire, brief form (WHOQOL-BREF) assesses the individual’s perception in a general index, independently of its 4 domains: physical, psychological, social relations and environment. The score ranges from 0 to 100, the closer to 100, the better is QOL perception. [12]

We used PSG for assessment of objective sleep patterns and to exclude volunteers with other comorbid sleep disorders from the study. All participants underwent a basal PSG, performed using a digital system (EMBLA® N7000; Embla Systems Inc., Broomfield, CO, USA) during their usual sleep time. The following physiological variables were evaluated: electroencephalogram (EEG), electrooculogram (bilateral), electromyogram, electrocardiogram (derivation D2 modified), airflow detection by a thermocouple and by nasal pressure, respiratory effort using thoracic and abdominal x-trace belts, snoring and body position by EMBLA sensors, percutaneous oxygen saturation (SpO2) and pulse rate by an EMBLA oximeter. All PSG were visually scored by a reg- istered and trained PSG technologist, blinded to group allocation. All sleep stages, EEG arousals, leg movements and respiratory events were scored according to the guidelines of the American Academy of Sleep Medicine.[17]

The sample size was calculated for 80% power, an effect size of 0.72 with Cohens’d and an α error of 0.05. For the subjective parameters (pain VAS as outcome), the required sample size was 12 per group and a total of 48 volunteers. The sample size calculation was made using G * Power software version 3.1.9.2 (Franz Faul; Universitat Kiel, Kiel, Germany). 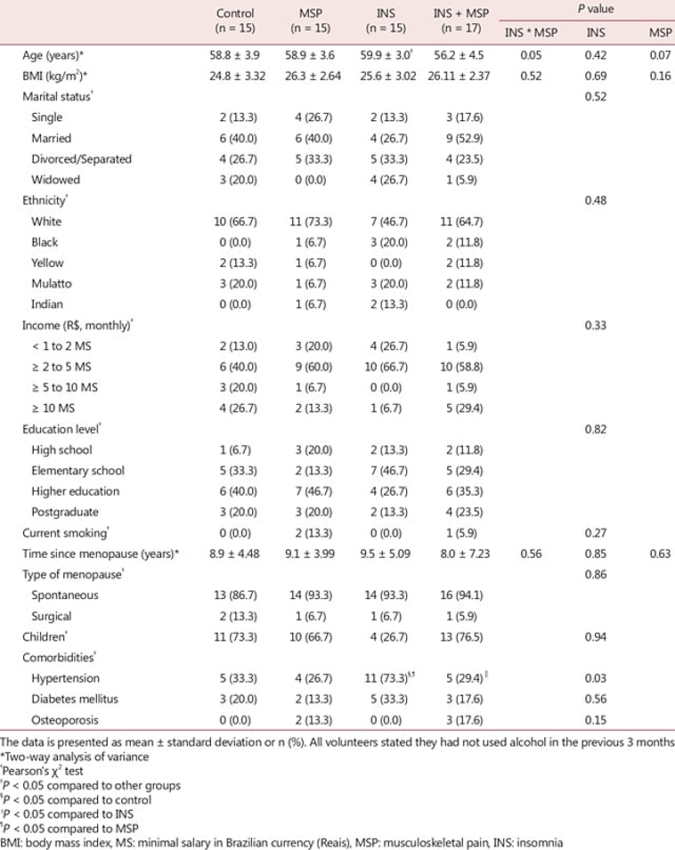 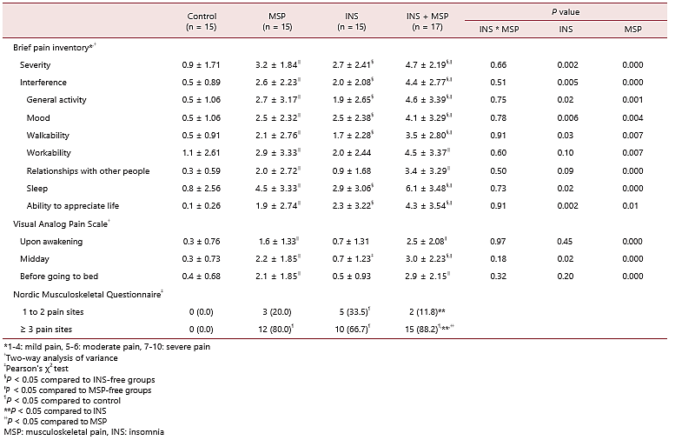 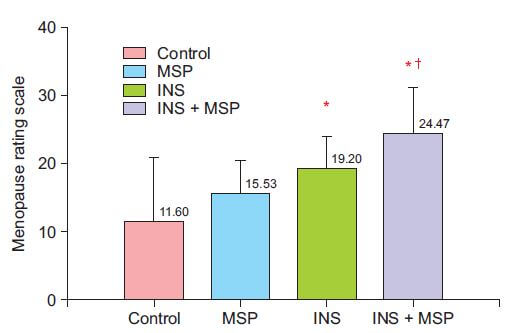 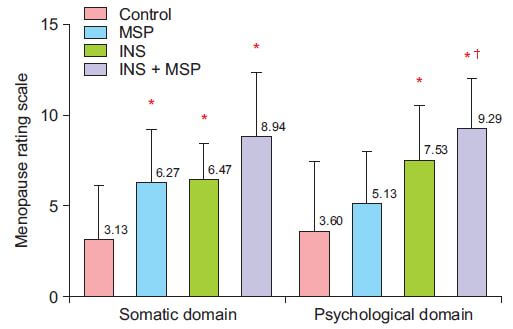 Fig. 3. Mean ± standard deviation of the somatic and psychological domains derived from the Menopause Rating Scale among control, musculoskeletal pain (MSP), insomnia (INS), and INS + MSP groups. Data analyzed through analysis of variance. *P < 0.05 compared to control; †P < 0.05 compared to MSP. The Menopause Rating Scale score is classified as 0 to 4: asymptomatic or scarce, 5 to 8: mild symptoms, 9 to 15: moderate  symptoms, and 16 to 44: severe symptoms. 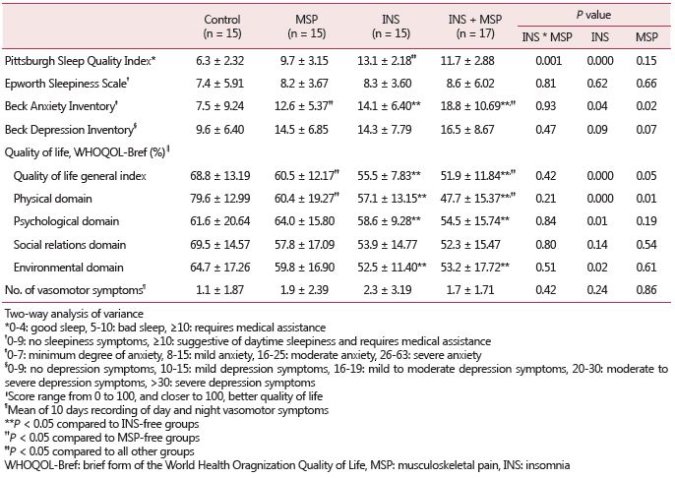 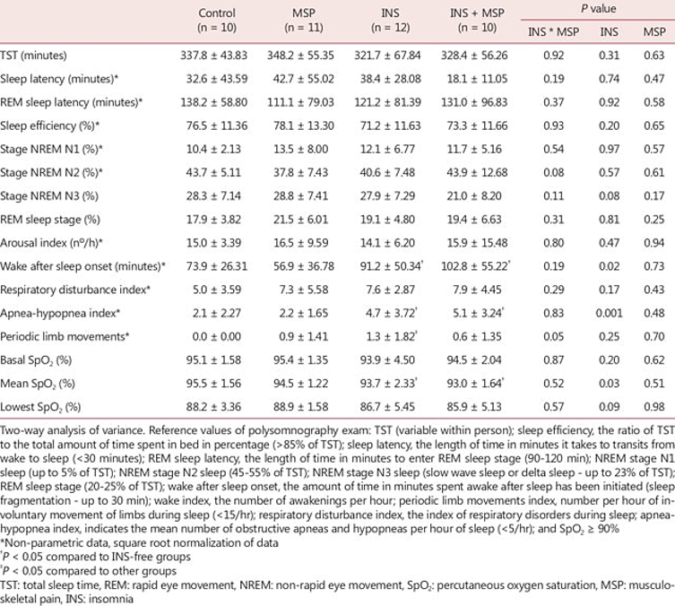 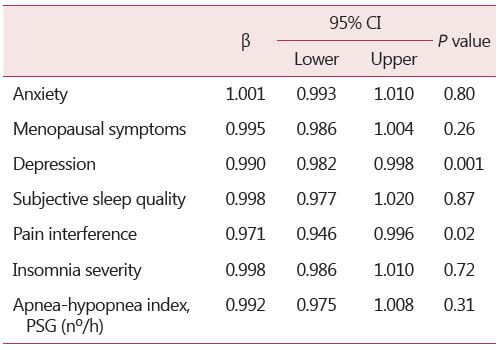 This is the first study, to the best of our knowledge, to show the characteristics of INS + MSP combined on increased anxiety, worse MSP severity and higher interference with daily function, more MSP intensity at midday, increased number of MSP sites, more sleep fragmentation (WASO) and worse QOL in postmenopausal women.

There is strong evidence about the sleep-pain interaction and its bidirectionality in the general population. INS, independently of MSP, has been shown to be associated with MSP severity and MSP interference in most of its domains. Chronic MSP conditions have been linked to disturbed sleep [10,11] and short sleep duration (<360 min). [4]

INS alone was associated with increased pain intensity at midday. A study by Tang and colleagues, [20] in the general population, showed that sleep helped to reduce pain intensity. A possible hypothesis for this is that sleep deprivation increases plasma levels of cortisol which is responsible for increased pain sensitivity. Cortisol concentrations start to decline from midday and reach their lowest concentrations in the late evening and during the early part of the sleep period. [21] In addition, the presence of restorative sleep seems to reduce chronic generalized pain [22] and in our sample, this restorative sleep“acted”only until midday, as our INS + MSP group complained of worse MSP intensity at midday.

Another hypothesis is related to the midday body temperature decline. The body temperature is a biologic rhythm closely associated with the circadian rhythm of sleepiness. [23] The thermoregulatory mechanism that lowers body temperature and the decline in cortisol concentrations can promote sleep. We speculate that both could have influenced the increased perception of MSP at midday, so the relief of pain generated by sleep was evident only until the first half of the day. Moreover, our sample did not present daytime sleepiness.

Both INS and MSP are core symptoms of menopause. INS influences the perception of other menopausal symptoms [24] such as MSP in our investigation. This finding, especially in relation to the somatic and psychological domains, is corroborated by another study that found INS symptoms as more correlated with psychological than with somatic symptoms. [25] Vasomotor symptoms, considered the hallmark indicator of menopause, represent a possible sleep interference. No statistical differences among groups in vasomotor symptoms were found in our sample.

Although no statistical difference was found in relation to depressive symptoms, they were, together with anxiety symptoms, predictive factors for menopausal symptomatology. Anxious people, in general, are more likely to have INS symptoms and individuals with INS appear to have a 17-fold increased chance of experiencing anxiety. [26]

The INS groups presented higher sleep fragmentation (WASO). Sleep fragmentation was the most common al- teration of sleep in chronic pain patients. [27] We observed increased AHI and decreased mean SpO2 in the sample of women with INS, but despite the statistical significance of these findings, they do not have clinical relevance, being within the normal range of reference parameters. MSP did not influence objective sleep parameters in our investigation.

Our postmenopausal women had impaired sleep with a short sleep duration of < 360 minutes on the PSG exam; poor sleep efficiency below 85% indicating non-restorative sleep; increased N1 sleep stage, indicating more superficial sleep; and increased WASO, evidence of sleep fragmentation. Lowest SpO2 was under the reference values in 90% of our sample.

MSP alone was associated with lower QOL in the physical domain in our investigation. We found depression and pain interference as predictor factors for worse QOL. Menopausal symptoms have been shown to affect QOL in other studies, particularly in the physical domain, the highest rates of complaints being muscle and joint pain. [29]  Sleep is an essential component of good QOL. [30]

There are some limitations in this study that should be considered. First, this was a cross-sectional design, which does not allow the establishment of causality between factors. Second, the MSP was assessed through self-reported data while combined subjective and objective data may be more suitable for research (e.g., Quantitative Sensory Testing). Third, the information about comorbidities was based on the participants’self-reports. Lastly, there was no night of adaptation for the PSG exam, which may decrease overall the sleep quality of the participants from all groups.

The present results demonstrate that INS + MSP combined was related to higher menopausal and anxiety symp- toms, more sleep fragmentation, more complaints of MSP severity and interference, more pain sites and worse QOL. The presence of INS was associated to more MSP intensity and interference on daily function. However, the presence of MSP was not associated with sleep. This indicates that in the bidirectional association between INS and MSP in postmenopausal women, INS seems to play a major role, but investigations of the direction are warranted. Sleep management is essential in women who have developed chronic MSP to improve QOL and reduce the possible development of comorbidities, such as anxiety, depression and INS.