Retiform hemangioendothelioma is a locally aggressive, rarely metastasizing, low-grade angiosarcoma characterized by intercommunicating vascular channels lined by hobnail or cuboidal endothelial cells, flanked by lymphocyte and hyaline sclerosis. Neoplastic endothelial cells usually express von Willebrand factor, CD31 and CD34, while the lymphocytic infiltrate shows a mixture of CD3+, T and CD20+ B cells. The authors describe a case of a 76-year-old female who presented with a soft, painless, ill-defined mass measuring 9 cm in her right gluteal region for the past 15 years, clinically suggestive of a lipoma. There was no regional lymphadenopathy. The mass was resected and sent for histopathological examination. The slow-growing lesion and the typical histomorphology led to the diagnosis of retiform hemangioendothelioma. The diagnosis was confirmed by immunohistochemistry using CD34 antibody, which strongly stained the endothelial cells. The patient was followed up for 6 months after the surgery and no recurrence was noted.

Retiform hemangioendothelioma (RH) was first elucidated in 1994 as a distinct vascular neoplasm of intermediate or borderline malignant potential and was classified as a low‑grade cutaneous angiosarcoma.[1] However, because of the infrequency with which RH is encountered, only tenuous and limited cases have been reported to date.

Here, the authors report a case of this rare vascular tumor, with a comprehensive literature review, succinctly describing the tumor and its management.

A  76‑year‑old  female  presented  to  the  outpatient Department of General Surgery at Jawaharlal Nehru Medical College and Hospital (JNMCH), with a painless, ill‑defined swelling in the right gluteal region for the past 15 years. On local examination, the swelling measured 9 cm × 9 cm and was soft, nontender, not fixed and the overlying skin appeared normal. There was no regional lymphadenopathy, and the patient did not have any history of constitutional symptoms such as fever, weight loss or loss of appetite. The clinical picture was suggestive of lipoma. Complete blood count, urine analysis, liver and renal function test, including blood sugar and electrolytes, were within normal limits. Serological tests for HIV, hepatitis B and C were negative.

The mass was resected with a margin of 2 cm, encircling the lesion, and was sent for histopathological examination. On gross examination, it was found to be a nonencapsulated, solid, fatty growth measuring 7 cm × 6 cm × 4.5 cm, with intact skin that was received separately [Figure 1]. On cut section, a central hemorrhagic area of 3 cm was observed, surrounded by fibrofatty tissue. Histopathology revealed lobules of mature lipocytes separated by broad fibrous bands, containing numerous narrow arborizing vascular channels lined by hobnail endothelial cells and surrounded by dense lymphocytic infiltrate [Figures 2 and 3]. The endothelial cells showed focal papillary hyperplasia and mild nuclear atypia in some areas. Mitosis and necrosis were absent. The surgical resection margins were not involved. 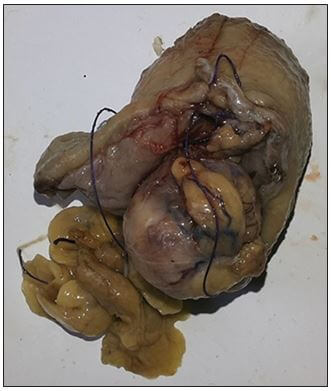 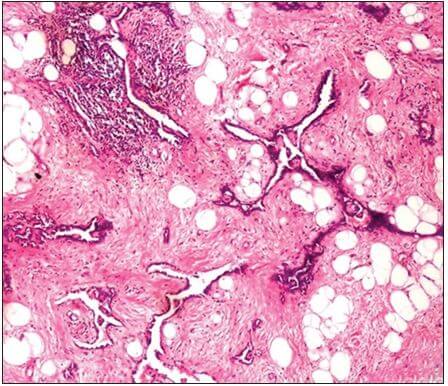 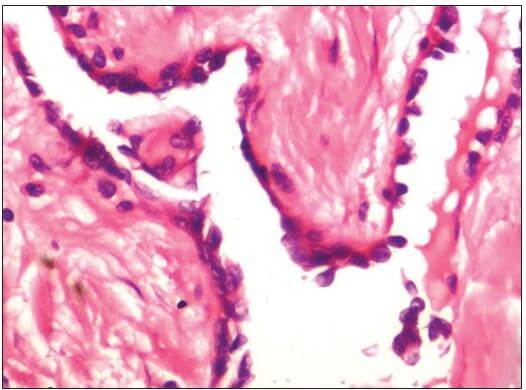 The typical histomorphology supported the diagnosis of RH, which was confirmed by immunohistochemistry with CD34 antibody [Figure 4], which strongly stained the endothelial cells. During the 6 months of follow‑up after surgery, no recurrence was noted. 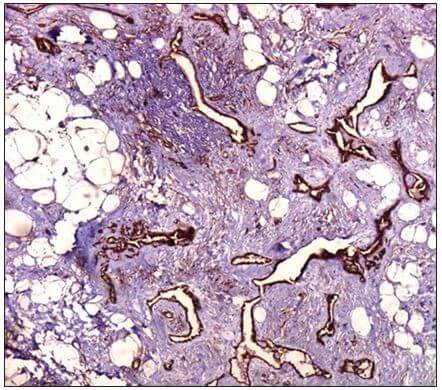 RH was first described by Calonje et al.[2] in 1994 as a rare, locally aggressive vascular neoplasm. To date, only 32 cases of this tumor have been reported in the literature.[3] In 2005, Tan et al.[4] reported 24 RH cases, of which 16 occurred in the extremities, 5 in the trunk and 1 case each in the scalp, skull and penis. Bhutoria et al.[5] reported another case of RH associated with lymph node metastasis and tumor recurrence.

RH has been subtyped as an intermediate (i.e., rarely metastasizing) vascular tumor, according to the World Health Organization’s classification of soft tissue tumor. Lesions can be either single or multiple and are commonly seen in middle‑aged adults, with the mean age being the fourth decade. There is a female preponderance for the development of RH, with a female to male ratio of 2:1.[6] The tumor mainly presents as a slow‑growing, ill‑defined mass, nodule or plaque involving the skin and subcutaneous tissue of the extremities, with rarer sites being the scalp, pinna, neck, trunk and penis.[2,7,8] The patient in this case report was an elderly female presenting with an ill‑defined swelling in the gluteal region.

Microscopically, the tumor is typified by elongated, anastomosing vascular channels, extending between the collagen bundles in a retiform fashion and flanked by lymphocytes and hyaline sclerosis. These vessels are lined by a single layer of cuboidal‑appearing endothelial cells with a characteristic hobnail morphology.[9,10] The lining endothelial cells are characterized by a high nuclear to cytoplasmic ratio and an apically placed nucleus that produces a surface bulge. However, dissection of collagen bundles by small groups of  endothelial cell, peculiar to conventional angiosarcoma, is not a feature of RH. The absence of atypical mitosis and necrosis also helps differentiate RH from invasive malignancy. Similarly, the case described here also demonstrated a fibrous band containing delicate arborizing vascular channels lined by a single layer of hobnail endothelium with mild nuclear atypia. Necrosis or increased/atypical mitosis was not found.

Neoplastic endothelial cells in RH consistently express endothelial markers as von Willebrand factor, CD31 and CD34, while the lymphocytic infiltrate shows a mixture of CD3+, T and CD20+ B cells.[11] It has been observed that staining for CD31 and von Willebrand factor is significantly less intense than staining for CD34. In the case described here, the authors applied the antibody against CD34 on the tumor sections, which stained the endothelial cells. Surgical resection with microscopically tumor‑free margin is the treatment of choice for RH; however, it is associated with a high recurrence rate of up to 60%. Adjuvant radiotherapy has been effectively administered in few reported cases of RH that had been deemed unresectable or those having regional lymph node metastasis.[12] Follow‑up is essential in all patients.

This report describes a rare case  of  RH  occurring in an elderly female. The patient showed typical clinical and histomorphological features of RH; however, it is important for clinicians to distinguish RH from various differentials for an early intervention and appropriate management.