Immunization of HCWs against selected diseases is strongly recommended, taking into account the high risk of exposure they have to blood, secretions or body fluids or other potentially contaminated environmental sources by microbial agents potentially vaccine-preventable.[1-3]

HCWs have an elevated risk of acquiring hepatitis B and C through percutaneous or mucosal exposures to infected blood, which occur in the health care setting, most often as a needle stick or other sharp injuries. It is estimated that HCWs receive 400 000 percutaneous injuries annually. Occupational exposures to hepatitis B virus have historically accounted for as many as 4.5% of the acute hepatitis B cases reported in the USA.[4] The risk of acquired hepatitis B infection, after a single exposure to hepatitis B virus-infected blood or body fluid, ranges from 6% to 30% with increased risk attributed to repeated exposure.[2] Even though it is rare, the transmission from  an infected HCW to patients has been reported for hepatitis B, as well as for other vaccine-preventable diseases[1]. Hepatitis B vaccination is currently recommended or mandated for HCWs worldwide.[2,3] Therefore, the vaccine coverage and the seropro- tection against hepatitis B constitute areas of concern and quality improvements in many settings.[5-14]

Recent studies conducted in HCWs show variable prevalence of seropositivity, between 54% and 97%, against measles, rubella, and varicella in Emirati medical students [4] and Turkey’s HCWs [15]. Similar results were reported in studies from Egypt, Japan, Australia and Italy.[16]

We conducted this cross-sectional study to determine seroprotection against hepatitis B, measles, rubella, and varicella among HCWs in a community hospital in Qatar.

This cross-sectional study was conducted in the Cuban Hospital, a 75-bed community hospital located in Dukhan, Qatar. Between August 2012 and December 2015, all new deputed medical staff (Cuban nationality) underwent a pre-employment medical evaluation, as per corporate regulations, which included the evaluation of health and immunization history and laboratory tests for measles, rubella, varicella, and hepatitis B. Data on age, sex, job cat- egory (physician, nurse, allied health care professional) and length of employment as a HCW, were collected from the staff register.

The collected sera were tested for the presence of IgG antibodies specific for measles, rubella, and varicella using Enzygnost® anti-measles-virus/IgG, Architect system/Rubella IgG, and BIO-RAD- PlateliaTM VZV IgG, respectively. According to the manufacturers’ recommendations, measles antibody titres <100 mIU/mL were considered “non-protective” or “negative,” those between 100 and 200 mIU/ mL were considered “equivocal,” and titers >200 mIU/mL were considered “immune protection” or “positive” results. For rubella the cut-off values were ≤4.9 IU/mL (negative),  5–9.9  IU/mL  (equivocal) and ≥10.0 IU/mL (positive); and for varicella the cut-off points were <0.8 IU/mL (nega- tive), 0.8–1.2 IU/mL (equivocal) and >1.2 IU/mL (positive).

Sera were tested by standard ELISA (Architect, Abbot) for HBsAb; a titer ≥10 IU/L was considered “positive (protected),” otherwise, it was “negative (non-protected).”

Statistical analyses were performed with JMP 5.1 (SAS Institute, www.jmp.com) and Epidat 3.1 (www.sergas.es/Saude- publica/EPIDAT-3-1). The prevalence of seroprotection as well as its 95% confidence interval were calculated. Categorical and continuous variables were analyzed with χ2 and Student‘s t test, respectively. A p value <0.05 was considered statistically significant. 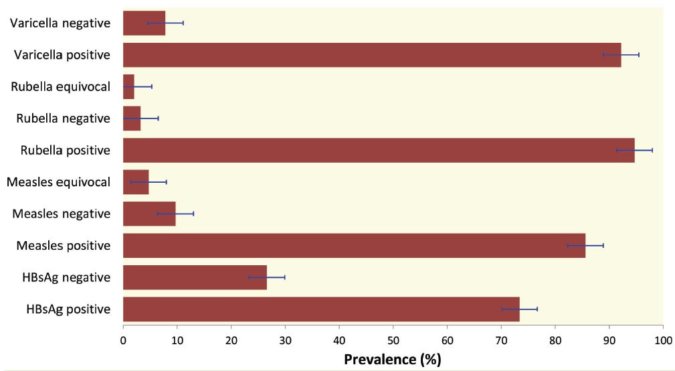 No significant difference was observed in seroprevalence of rubella and varicella (94.7% and 92.2%, respectively). The only exception was the significant (p=0.04) pre-dominance of varicella seropositive rate in HCWs with higher age (mean 40.0, SD 6.5 years) and longer service (mean 17.6, SD 7.0) (Table 1). There were no significant sex-related differences in the seropositivity for these diseases.

The coverage of hepatitis B vaccination and the frequency of non-immune staff in the HCWs studied were acceptable. Byrd, et al, reported that 63.4% of HCWs reported receiving ≥3 doses of HepB vaccine.[14] Lower rates were reported from Tanzania (48.8%) and Mexico (52.0%).6,9 The deficiency in vaccination coverage was attributed to several factors including refusal to vaccination for fear of adverse events, low-risk perception, doubt about efficacy, un-availability of free of charge services, etc. The low percentage (15.6%) of the HCWs who received only a single dose of the vaccine was mainly attributed to interrupted vaccination schedule. This would be prevented by raising the awareness of HCWs, improving the management system and increasing supervision. For example, a recently published paper reports the effect of employing a multifaceted program on influenza vaccine coverage.[18]

The observation of higher hepatitis B vaccination coverage in nurses (predominantly females) compared with physicians and technicians, is most likely due to individual factors (eg, risk perception) or greater focus on vaccination programs for specific occupational categories. Similarly, the increased coverage among older HCWs might be a reflection of the performance of the vaccination program.

The observed frequency of HCWs without protective levels anti-HBsAb was primarily attributed to deficiencies in vaccination coverage. Nevertheless, there is evidence showing that the vaccine is protective if the anti-HBsAb titer once rises to a level above 10 IU/L, and that the protection persists even if the antibody levels decline below 10 IU/L.

The prevalence of seroprotection for measles, rubella, and varicella in HCWs was similar to other published reports.[5,6,16,19] In Cuba, vaccination against measles and rubella is not included in the immunization program for HCWs; it is included in the national immunization program with high coverage of the population and no one has been reported with these diseases since more than two decades ago.[20]

The observed seropositivity rate with less seroprotection in younger HCWs for measles could be considered an unexpected result because of the high vaccine coverage of the population. Nevertheless, several studies have shown similar results.[16,18,21,22] Aypak, et al, found that 79.2% of staff aged ≤25 years and more than 90% of older group were immune.[16] Urbizondo, et al,[22] reported seroprotection in 94.4% of HCWs aged ≤30 years and in 97.0% of older ones. No plausible reason explains the increased seroprotection in physicians compared with other job categories.

Varicella is a highly contagious infectious disease frequent in tropical areas and occurs more commonly in adults than in children. Because varicella vaccine is not included in national immunization schedules in many countries, including Cuba, acquisition of natural immunity against the disease is frequent. This might explain the observed seroprotection in Cuban HCWs.[23]

Our findings and analysis are limited by the characteristics of HCWs studied. They worked overseas because of specific skills and competence issues that could limit the comparison with a general population of HCWs in Cuba. In addition, recall bias of the participants needs to be considered regarding the previous history of hepatitis B vaccination. Raising awareness of HCWs, improving  management  and  increasing supervision on vaccination programs would help a better assessment of the situ- ation and increase the vaccine coverage.