Streptococcal meningitis can be caused by certain streptococci species, which are spherical Gram-positive bacteria with Streptococcus (S.) pneumoniae being the most important causative pathogen in adults and children [1]. Other streptococcal species that have been reported to cause meningitis include S. agalactiae [2], S. bovis [3], S. milleri [4], S. mitis [5], and S. salivarius [6], however, these species are an infrequent cause of bacterial meningitis in adults and children.

We performed a secondary post hoc analysis of collected data from our previous study entitled “Acute Bacterial Meningitis in Qatar: A Hospital-Based Study from 2009 to 2013” [7]. We retrieved patients with streptococcal meningitis from the primary study, which was a retrospective descriptive study that involved all in-patients with acute bacterial meningitis at Hamad General Hospital between January 1, 2009, and December 31, 2013.

Streptococcal meningitis was considered if at least one of the following compatible clinical pictures were met with no other apparent cause: fever (38°C), headache, meningeal signs, cranial nerve signs, and impaired mental status, plus one of the following [9, 10]: 1. Positive cerebrospinal fluid (CSF) culture; 2. Positive CSF bacterial antigen test (with latex agglutination counterimmunoelectrophoresis) associated with pleocytosis mainly neutrophilic, defined as absolute WBC ≥ 100 cells/mm [3], with a decreased glucose level ≤ 2.2 mmol/L and an increased protein concentration ≥ 60 mg/dL.

Streptococcal meningitis was considered nosocomial if the diagnosis was made after more than 48 hours of hospitalization or within a short period of time (i.e., usually within one month after discharge from the hospital where the patient had received an invasive procedure, especially a neurosurgical procedure). On the other hand, ABM was considered as community-acquired if the diagnosis was made within the first 48 hours of hospitalization and the patient was not hospitalized in the preceding month [7].

We selected cases of streptococcal meningitis from the primary study. We described the demographic and clinical characteristics, of these patients as well as the underlying conditions, name of species, appropriateness and outcome of therapy.

The original study was approved by Medical Research Ethical Committee at HMC, Qatar. Since this was a secondary post-hoc analysis of collected data from our previous study, no ethics committee approval or informed consent was required. 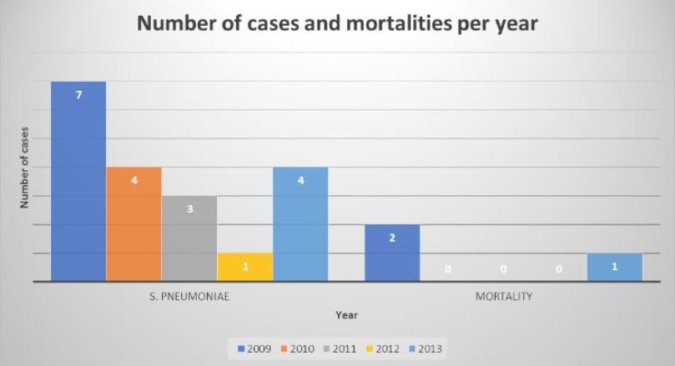 Fig 1: Number of pneumococcal cases meningitis and mortalities per year

Table 1: Demographic and clinical data of the involved patients

Cerebrospinal fluid (CSF) was obtained from all patients. Gram stain was positive in 88.8% of the cases. Table 3, summarizes the results of CSF analysis.

Among the Streptococcus pneumoniae, 3 (15.8%) episodes were resistant to ceftriaxone, while all are sensitive to vancomycin. Details of antimicrobial susceptibility are shown in table 2.

Table 2: Species distribution with their drug resistance to common antimicrobials

Antimicrobial treatment was initiated for all patients. Ceftriaxone plus vancomycin combination were used most frequently followed by meropenem. The mean duration of therapy was 18.4±13.9 (1-27 days). Central nervous system complications include brain abscess 3 (11.1%), hydrocephalus 3 (11.1%) and stroke 3 (11.1%). The in-hospital mortality was 3 (11.1%) and all cases were infants with pneumococcal meningitis.

To our knowledge, this is the first report from Qatar and the Arab countries that describes clinical and epidemiologic features of streptococcal meningitis in different age groups, which will help to approach such cases properly and initiate appropriate empirical treatment as early as possible. Since the introduction of the seven-valent then 13-valent pneumococcal conjugated vaccines (PCVs), there was a decline in the number of reported cases of pneumococcal disease, including pneumococcal meningitis in both adults and children [11, 12]. PCV-7 was licensed in Qatar in August 2005, and PCV-13, in November 2010, nevertheless, the effectiveness of such preventive measures in Qatar and the actual disease burden have not been investigated. Similar to other reports, our study showed a reduction in the overall number of the cases of streptococcal meningitis that were reported before and after vaccine initiation (see figure 1). In addition to the implementation of vaccine programs, this decline can be attributed to several factors, including improved living conditions, easy access to healthcare facilities, the development of diagnostic facilities and improved prevention and control strategies by the Qatar health authorities against all types of meningitis including streptococcal meningitis.

The current study showed a predominance of male sex, similar to the previous two studies [1, 8], and the main affected age group was neonates under one year of age. It is interesting to note that despite the availability of the S. pneumoniae vaccine in Qatar, meningitis among 50% of this age group was due to S. pneumoniae, which is similar to reports from Northern America that show S. pneumoniae as an important cause of bacterial meningitis among neonates despite high vaccine coverage [13-15]. It is worth noting that despite the overall decrease in the number of pneumococcal cases in our study, the number of cases increased slightly in 2013 (see figure1). This may be due in part to the fact that a shift in disease causing strains towards non- vaccine serotypes may occur naturally with time in response to vaccine pressure that may eventually limit the effect of vaccination with currently available vaccines [12, 16]. Moreover, the heterogeneity of the society in Qatar due to the multinationals may affect the impact of the vaccine on the prevalence of pneumococcal meningitis.

As noted in this and other reports [1, 8], the most consistent clinical features of streptococcal meningitis were fever, headache and mental alteration, which are non-specific and can be found in other infections such as septicemia. Moreover, meningism was found in 48% of our cases, which makes diagnosis a challenge requiring high index of suspicion especially among neonates.

The susceptibility profile of streptococcal species isolates to various antimicrobials in our series showed a 100% resistance to penicillin and ceftriaxone among S. bovis II, S. milleri, S. mitis species, while the resistance to these antibiotics among S. pneumoniae was 31.6% and 15.8% respectively. This finding is in line with many reports [19-21], that showed resistance of pneumococci to penicillin and cephalosporins, and support the guidelines that recommend initiating ceftriaxone and vancomycin as an empirical therapy of choice for suspected community acquired bacterial meningitis until the results of the sensitivity are available.

The mortality among our patients was 11.1%, and all were infants less than one-year-old infected with S. pneumoniae. Our finding is similar to findings from other countries which showed acute bacterial meningitis in childhood has considerable mortality and complications.

There are several limitations to our study. Firstly, it was a retrospective study, therefore we were unable to study many variables, such as the immunization status of the patients and the complications. Secondly, Streptococcus pneumoniae serotypes were not identified thus we lost the opportunity to be sure of the phenomenon of serotype replacement. Thirdly, it was hospital- based, thus we cannot generalized our results.