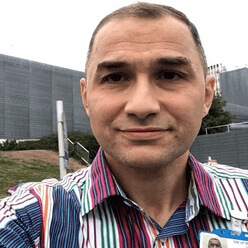 Dr Mokhamed Orabi is an experienced specialty doctor in the Obstetric and Gynecology Department at St Mary’s Hospital, Isle of Wight Trust. He is a member of the Royal College of Obstetricians and the Royal College of Obstetricians Gynecologists MRCOG London and has Diplomate in Obstetrics & Gynecology from College of medicine of South Africa ( Dip Obst SA) CMSA; Clinical Ordinatura O&G (MD) - M Gorky Donetsk State University and a MBChB from Baghdad University. His Special interest are feto-maternal medicine ,colposcopy and medical education.

Abdominal pregnancy usually presents with signs and symptoms before the pregnancy reaches an advanced stage. They pose a high-risk to the mother and the baby, mainly due to the risk of bleeding and poor placental implantation respectively.

I present a case of advanced abdominal pregnancy. The pregnancy reached 40+5/40 without any signs or symptoms and with a well-growing baby.

The extra-uterine pregnancy and its location were not diagnosed or established until the time of the delivery by elective caesarean section for post-date and unstable lie. The delivery resulted in a healthy live baby and mother in stable condition at Estcourt District hospital, KZN South Africa.

Abdominal pregnancy is a rare type of ectopic pregnancy which refers to a pregnancy that has implanted in the peritoneal cavity, external to the uterine cavity, fallopian tube, or ovaries.

The diagnosis of abdominal pregnancy can be difficult especially in low-resource areas with high-population and limited facilities. Abdominal pregnancy is usually presented itself with signs and symptoms before it reaches advanced stages of pregnancy also it poses a high-risk to the mother and the baby mainly due to the risk of bleeding and poor placental implantation respectively with maternal mortality rate 0.5-18 % and perinatal mortality rate between 40-95%.4-6 An abdominal pregnancy that reaches 40-weeks without any signs or symptoms and results in a healthy mother and baby is a rare condition.

A 26-years old HIV seronegative Prim gravida woman came from a rural area in KwaZulu-Natal province, South Africa. She was booked at her local antenatal care late at 30-weeks of gestation, calculated by her last menstrual period, then she was referred to the high-risk clinic at Estcourt District hospital on 38-weeks due to high presenting part. At the clinic, the fetal head was ballotable above pelvic brim. U/S was done and confirmed normal pregnancy with a high presenting part and fundal placenta. Her next appointment was at 40-weeks when an elective caesarean section was booked on 40+5/40 with an indication of post-date7 – query Cephalopelvic disproportion and unstable lie.

The patient was listed in the daily morning routine slot for lower segment C/S and Grade 2 Medical officer (5 years’ experience post community service) was allocated to do the list with a junior assistant under spinal anaesthesia.

The mass was attached principally to the lower part of greater omentum with the presence of common vascular supply, also other attachments were noticed on the right fallopian tube. That’s besides some fibrous, avascular, adhesion to the large bowel.

After manipulation on the mass moderate bleeding was noticed from the area between the mass and the omentum so pressure has been applied and urgent call for more experienced colleagues to attend was requested.

Both Clinical Managers of O&G and surgical departments took over from the operative team and after fast assessment of the case, the diagnosis of abdominal pregnancy with viable fetus was spotted.

Considering the presence of moderate bleeding and the distance to the nearest regional hospital (which is about 2 hours from our district hospital), the decision was taken to go ahead and deliver the baby as soon as possible with trial to achieve haemostasis after that.

Another Intravenous access was inserted and 4 unit of blood was ordered from the regional hospital as we don’t have a blood bank in our facility.

Following the extension of skin incision and a digital rupture of the amniotic sac, a live 2500g male baby was delivered with 9+1 and 10+2 Apgar score. The baby was thoroughly screened by the Paediatric team and found to be healthy with no congenital abnormalities (Figure 1).

After delivery of the baby, a good exploration of the area was done. This was confirmed by the primary finding of placental implanted area to the lower part of greater omentum with a common vascular supply and no further vascular attachment to other abdominal or pelvic organs which made the full removal of the placenta and its implanted site a feasible option by surgical ligation of this supply in conjunction of performing of partial omentectomy and right salpingectomy.

Multiple clamps were applied on the omentum approximately 2 cm above the placental insertion to secure all the vascular tissue and by diathermy the mass included the placenta and membranes were excised carefully from the omentum, then multiple haemostatic sutures were inserted in the lower edge of the omentum and haemostasis was achieved (Figure 2). Using the same technique right salpingectomy was done and the mass was completely removed outside the abdomen. Small bleeding spots were controlled by diathermy then oxidised cellulose (surgical) was applied.

The surgery took 2 hours during which the patient was stabilised with 4 units of fresh dried plasma, 1 emergency unit of packed red blood cells (PBC) and 1g of tranexamic acid, then she was transferred to the regional hospital for intensive care admission and close monitoring.

The estimated blood loss was 3.5L with postoperative ward Haemoglobin of 8.1g/dL. On the next day, her blood results showed Haemoglobin of 4.3g/dL, Platelets of 177, WBC of 8.45 and normal U&E, LFT and clotting factors.

She received 4 units of packed red blood cells and discharged home on day 5 in stable condition then She was followed up by serial measurements of serum beta human chorionic gonadotrophin (β‐hCG) which went down to <20 IU/l on week 3 after the operation.

Histopathological report of the extracted mass confirmed the presence of the omentum tissue and the fallopian tube with no ovarian tissue found in the placental bedding which excluded the possibility of ovarian pregnancy.

Abdominal pregnancy is one that occurs in the abdominal cavity outside of the female reproductive organs in which the placental bed may become attached to one or several abdominal structures.8

Abdominal pregnancies can be classified as early or late based on the gestational age at which they present.

In our case, it is most likely to be secondary abdominal pregnancy due to the presence of fallopian tube tissue with serosal fibrous adhesion in the placental specimen.

The diagnosis of abdominal pregnancy still a challenge and ultrasound examination still the tool of choice for the diagnosis.

This will identify an empty uterus with the presence of a gestational sac or mass separated from the uterus, adnexa, and the ovaries. Mostly this happened in 1st or 2nd trimester accompanied by symptoms as abdominal pain which will increase the index of suspension to reach the diagnosis.
An accurate diagnosis is important as eventual management depends on the exact location of the pregnancy and the organs to which it’s attached. In spite of that, only 50% accuracy can be expected for the diagnosis of early abdominal pregnancy (to be distinguished from other types of ectopic pregnancy) when ultrasound is used along with clinical evaluation10 which can be extremely variable and the diagnosis can be complex and requires a high-index of suspicion.

It is not uncommon to diagnose abdominal pregnancy for the first-time during laparotomy or laparoscopy performed for tubal ectopic pregnancy, but it is extremely rare to make the first diagnosis of abdominal pregnancy while doing an elective caesarean section for another indication.

This is what occurred in our case in which late presentation to the ultrasound examination at 38-weeks went with the absence of clinical symptoms led to missing the diagnosis by the sonographer.

The main reason for this pregnancy to reach an advanced stage without interruption or complication was the fact that the placenta was implanted over the omentum which gets it blood supply from the Aorta via celiac artery which allows the placenta to build-up a good blood supply to survive the baby up to 40 weeks.

The most common complication of abdominal pregnancy in the third trimester is life-threatening bleeding from the placental site, which usually happens during the laparotomy which requires a great deal of surgical expertise and in most cases a multidisciplinary approach when it is anticipated. The general recommendation is to leave the placenta in situ and monitoring the patient’s level of human chorionic gonadotropin.3, 11

In this case the diagnosis was made intraoperatively and considering the presence of senior personnel and risk of bleeding, the decision was taken to go ahead and deliver the baby as soon as possible and achieve haemostasis.

Fortunately, through the operation, placenta was adherent the lower part of omentum, shared a common vascular supply that was easily accessible and could be ligated without compromising adjacent maternal viscera that made the full surgical removal of the placenta and its implanted site is possible which was performed in conjunction with partial omentectomy and left salpingectomy so no placental tissue was left behind.

For the newborn it is very important to rule out congenital malformation and IUGR as the fetal anomalies have been estimated as high as 40%.3

Undiagnosed term abdominal pregnancy with a live foetus is an extremely rare condition. Ultrasound and MRI can be useful tools to make the diagnosis at an early stage that’s besides the signs and the symptoms which will raise the index of suspicion as this is curtailed to avoid the serious complication, the placenta can be left in situ followed by monitoring of the patient’s level of human chorionic gonadotropin regularly however complete removal of the placenta, if feasible and safe, will reduce the maternal morbidity and mortality.

• Undiagnosed term abdominal pregnancy with a live foetus is an extremely rare condition.

• Early pregnancy Ultrasound and MRI can be useful tools to make the diagnosis at an early stage that’s beside the signs and the symptoms which will rise the index of suspicion.

• Life-threatening bleeding from the detached placental site is the most serious complication of advanced abdominal pregnancy.

• These complications can be avoided by leaving the placenta in situ and monitor the patient’s level of human chorionic gonadotropin regularly however complete removal of the placenta, if it feasible and safe, will reduce the maternal morbidity and mortality.

• The Implantation site of the placenta over the Omentum allowed the pregnancy to get enough blood supply and reached 40-weeks with a well-growing baby.

6. Adesiyun, A.G. and A.I. Audu, Term extrauterine pregnancy in a Nigerian mother: a complication of uterine dehiscence. Archives of gynecology and obstetrics, 2009. 279(1): p. 75.