It is projected that coronary artery diseases (CAD) will be the leading cause of death in developing countries by the year 2025 [1]. In Egypt, according to WHO  statistics, the mortality rates secondary to CAD is rapidly rising [2].

Vitamin D deficiency is prevalent in most parts of the world. Vitamin D exists in two forms: Ergocalciferol (D2) and cholecalciferol (D3) [3].

Although vitamin D is traditionally associated with bone health because of its crucial role in bone and mineral metabolism [5], different non skeletal functions have been proposed for this critical vitamin. Recently, a much broader role has been implicated for this unique vitamin, owing to the presence of its receptor in different tissues, including cardiovascular organs. Atherosclerosis, as a hallmark of cardiovascular disorders, is a complex process that can progress for decades before presentation [6].

However, there’s still remains insufficient evidence owing to controversial reports in the literature both in favor of [7] and against [8] this concept. However, genetic polymorphism of the vitamin D receptor could modify its role [9]. Thus, differences in ethnicity, life style and geographic conditions could potentially change its effects.

Although coronary angiography is considered to be the gold standard method for the evaluation of coronary artery disease and its management, it is invasive. The noninvasive techniques, such as coronary CT angiography (CCTA), have been developed and are considered as important diagnostic tools for identifying patients with CAD, especially symptomatic patients . CCTA is also important in determining coronary artery calcium score (CACS) as well as determining the best management for patients with CAD. In addition to its advantages, CCTA has some limitations, including exposure to high doses of radiation and low sensitivity and specificity due to blooming artifacts caused mainly by the calcification of vessels (10 Sun Z).

The aim of this study is to assess the correlation between vitamin D level and coronary artery findings using MDCT.

Two hundred and Fifty patients were included in our study that was held at the period from January 2017 to March 2019. They were 175 males (70%) and 75 females (30%), their age ranged from 42 to 69 years. The protocol for the CT exam and a Zagazig University Institutional Review Board (IRB) approved consent form was used in our study. Patients signed a printed informed consent and asked also to fill a written survey including demographic and clinical data.

The work has been carried out in accordance with The Code of Ethics of the World Medical Association (Declaration Helsinki) for studies involving humans.

All examined patients were referred to us from the cardiology outpatient clinics, Zagazig University hospitals.

Patients with renal insufficiency presented with arrhythmia or underwent coronary stenting or bypass graft were excluded. Those regularly taking vitamin D were excluded as well.

All patients were subjected to the following:

B) Patients were asked to perform blood sampling for analysis of serum level of 25- hydroxyvitamin D (25(OH)D), that was measured using high-performance liquid chromatography.

Patients were asked to fast 4-6 hours prior to the examination.

Beta Blockers: to reduce the heart rate (below 65 bpm), oral administration of a beta blocker (unless contraindicated, we used concor 5 mg) 1 hour before CT scanning was applied. The onset of action of is approximately 30 min.

Breath-hold Training : to improve the temporal resolution, patients were practiced to take deep breath then hold it for about 20 seconds in order to reduce the heart rate, as well as during the actual scan to reduce respiration motion  artifact.

Through 18 G cannula into the ante-cubital vein of the right upper limb the intra venous contrast was injected according to the patient weight we adjusted the contrast agent injection rate (usually 5-6 ml/sec) & the required amount of contrast (1-1.5 ml/kg, mean about 100 ml for an 80 kg body weight). First we inject contrast agent, then saline chaser (50 ml by the same flow rate of contrast injection) simultaneously, using a dual-syringe injector.

Sublingual nitroglycerin administration was routine at all exams. Its action starts within ten to twenty seconds after its administration, and its effect lasts for ten to thirty minutes.

The scan range applied was started from the level of aortic knob down to the diaphragmatic copula to secure the vicinity of the inferior & posterior heart surface.

First we apply a non contrast series to calculate the calcium score (using the Agatson’s score) We   applied   the   bolus tracking technique. Simply it monitors contrast arrival and trigger the scan so long the pre-determined threshold achieved (180 HU). We put the ROI (region of interest) at the descending thoracic aorta just below the level of tracheal bifurcation. There is delay time of 6 seconds between the contrast arrival to the determined      threshold and triggering the scan. We used a retrospective ECG gated coronary scan.

All scans were reviewed and processed by two radiologists who are competent at cardiac imaging. Images were reconstructed at 0, 30, 35, 40, 50, 70, 75, 80, 85 & 90 of the R–R interval of the cardiac cycle. The images were then post-processed using the Philips Extended intellispace™ portal Workstation. Multiple reformations multi-planner reformation (MPR), curved planar reformation (CPR), maximum intensity projection (MIP), and volume rendering (VR) to delineate the coronary arteries, cardiac and extra cardiac changes.

The findings of CT imaging studies were evaluated and correlated to the serum vitamin D levels. Quantitative variables and qualitative variables were expressed as mean + standard deviation and proportions were expressed as percentages. Sensitivity, specificity and diagnostic accuracy were calculated. All data manipulation and analysis were performed using the 20th version of SPSS (Statistical Package for Social Sciences).

Table 1. sex and age groups among the study participants. 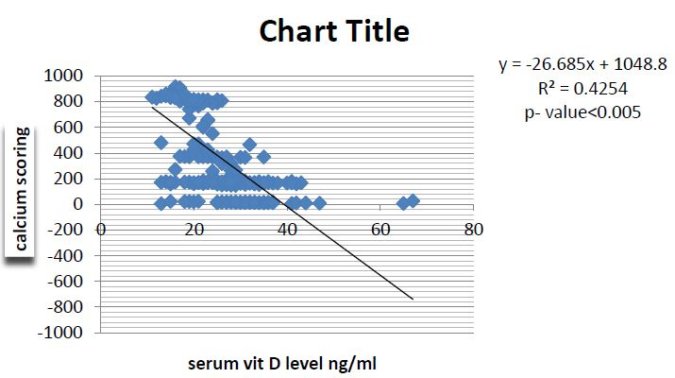 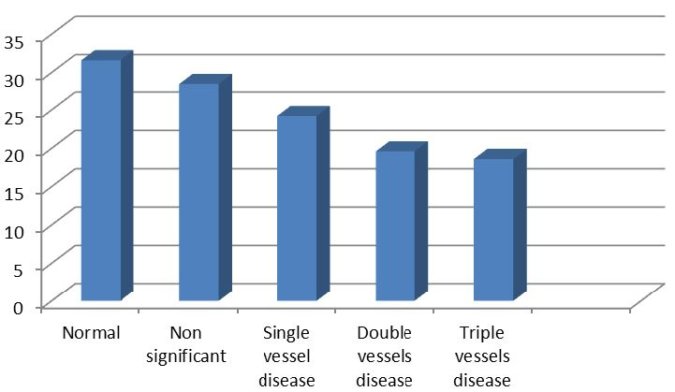 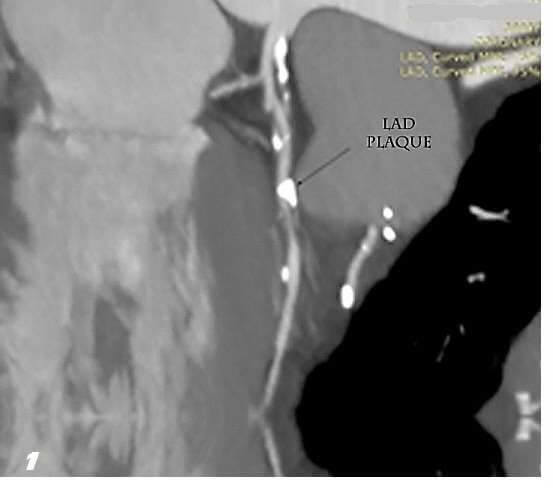 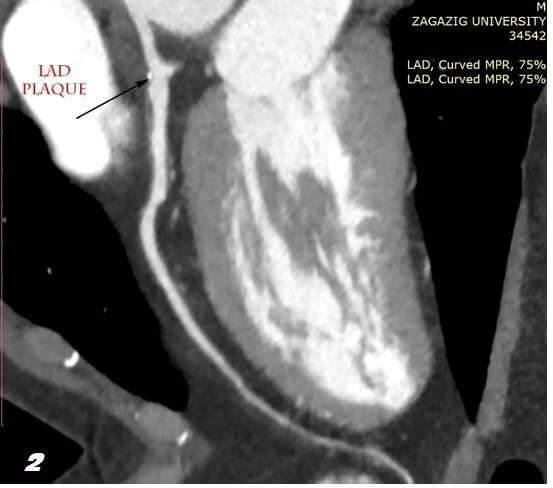 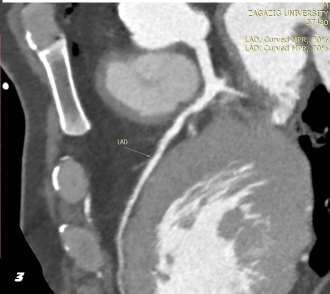 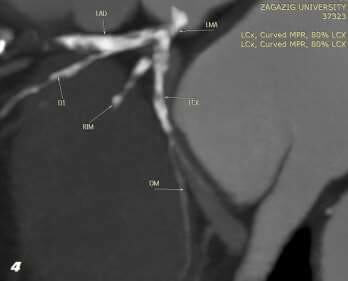 Vitamin D is a hormone precursor. Its mature form is 1,25-Dihydroxyvitamin D and it helps in regulation of mineral haemostasis [13].

Most of the tissues have its receptors including heart muscle. Vitamin D plays an important roles in muscle and immune system physiology and in the process of inflammation and cell proliferation [14].

We found that smoker males are significantly more dominant into group II than group I (P=0.005). Negative family history was more prevalent in group I (Negative CAD), but such difference was non-significant (P=0.1).

In our study, the mean calcium score among participants was 382.45 ± 47.5 and the patients were classified as normal, minimal, mild, moderate and severe calcium scores.

We found that the mean calcium score was significantly higher in patients with severe CAD (P<0.001).This was in agreement with Moradi M et al [15]. Also Almasi et al evaluated the value of CACS for predicting the presence and severity of CAD among 202 patients. Their findings confirmed the association between CACS and CAD occurrence as well as its severity [16, 17].

Conversely, the mean CACS was significantly higher in patients with vitamin D deficiency comparing with those who had sufficient or insufficient vitamin D level (P<0.001).

This was in agreement with Moradi and Foroutanfar, who found a significant relationship between increased CACS and the severity of vitamin D abnormalities (deficiency or insufficiency)[18].

In our study there was significant relation between the deficiency of vitamin D and the severity of CAD, as the mean serum vitamin D level in the first group “positive for CAD” was 20.1 ng/mL, which was significantly  lower than its value (29.7 ng/mL) in the second group “negative for CAD” (P<0.001).

This was in agreement with Moradi and Foroutanfar who found that the serum vitamin D level in the “positive for CAD” group was 20.98 ng/mL, a value that was significantly lower than that (30.47 ng/mL) in the “negative for CAD” group (P<0.001) [19]. This relation can be explained by the relation of CACS and plaque burden of the coronary arteries.

However, these results are contrary to those of Ho et al [20] , we thought that this disparity  was found because of the differences in both geographic location and ethnicity, as well as a lower CAD prevalence and the lack of female participants.

Vitamin D receptors can be found in most tissues including heart muscle. It has some important roles in maintaining normal function of muscles and controlling the inflammatory process and immune system [21].

The pathophysiology of these relationships between vitamin D and cardiovascular  disorders can be explained by the role of vitamin D in regulating the renin-angiotensin axis by suppressing the expression of renin gene. So vitamin D deficiency may be associated with hyperactivity of the renin- angiotensin aldosterone system with subsequent cardiovascular abnormalities [24].

Also vitamin D deficiency can lead to inflammation of epicardial adipose tissue, which has a role in the pathogenesis of CAD. [26].

There are some limitations of this study. We only had single vitamin D level report of each patient and could not follow its level during long period of time. CAD is chronic  disease and requires long duration to develop. Another limitation is the seasonal variation of vitamin D which may affect the result.